Bayliss hinted that England could again rest some of their big names before the World Cup.

England coach Trevor Bayliss has hinted at some of the team’s big names being rested for the home ODIs against Pakistan in May in order to allow the selectors and management to judge some of the fringe players before the hosts name their squad for the 2019 ICC Cricket World Cup.

Speaking after England sealed a 3-0 sweep of West Indies after the final T20I on Monday, Bayliss said that the No 1 team in ODIs had almost settled on their World Cup squad. (READ: David Willey stars as West Indies routed for 71)

“I think we’re getting fairly close to the final 15,” he told Sky Sports. “It’s going to make our job a little bit hard with some of the performances in this T20 series.

“Obviously, the World Cup is a 50-over competition but we’re going to have to have a good hard, long chat about that World Cup squad. We’ve got a one-dayer against Ireland and then five against Pakistan before we have to finalise that squad so there are some important games coming up. April 23 we’ve got to a 15 but we can change it right up until the May 22 so that Pakistan series will play a part, I think, in our final decision.” (READ: Willey questions the logic of fast-tracking Archer)

Among those to have put their hands up for World Cup selection are the pace bowling pair of Chris Jordan, named Player of the Series in the T20Is, and David Willey who took a career-best 4/7 as West Indies were bowled out for 71 in the third game. There is also the uncapped Jofra Archer, who will be eligible to represent England this month. (READ: ‘I hope the ship hasn’t sailed’ – Chris Jordan)

England rested Jos Buttler, Ben Stokes and Moeen Ali for the T20Is against West Indies and Bayliss suggested more big names could be given a break in May against Pakistan. (READ: Archer could gate-crash England’s World Cup squad: Bayliss)

The World Cups begins May 30. 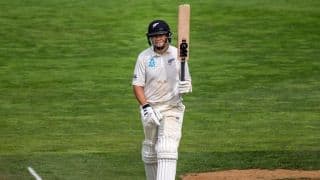