Heading in the final T20I with an unassailable lead of 12-2 over England, Australia failed to chase down a target of 140, despite Ellyse Perry's valiant 60 not out off 50 balls.

After conceding the multi-format Women’s Ashes series to Australia, hosts England claimed a consolation win over the Women’s No.1 ranked T20I outfit in the third and the final Women’s T20 international at Bristol on Wednesday.

Heading in to the final T20I with an unassailable lead of 12-2 over England, Australia failed to chase down a target of 140, despite Ellyse Perry’s valiant 60 not out off 50 balls. The next best score for Australia was 28 from opener Alyssa Healy. None of the batswoman apart from Perry and Healy managed to register double-figure scores, with England bowlers enjoying a field day. ALSO READ: Women’s Ashes 2019: Ellyse Perry sets new T20I milestone as Australia stay unbeaten against England

Earlier, after being out in to bat, England lost opener Tammy Beaumont early to left-arm spinner Jess Jonassen followed by the quick wickets for Danielle Wyatt (20) and Natalie Sciver (5), as England were left reeling at 45/3. Skipper Heather Knight found support in wicketkeeper Amy Jones (19). Lauren Winfield (26*) and Brunt (25*) then pushed England’s total to 139/5. Also Read: ENG vs AUS, 1st Test, The Ashes 2019, England vs Australia LIVE streaming: Teams, time in IST and where to watch on TV and online in India

Australia could only manage 122/8 in their 20 overs. For her all-round effort in the final T20I, Brunt was adjudged the Man of the Match

But the visitors will be the happier side heading home after blanking England 0-3 in the ODIs, drawing the only Test and then claiming the T20I series 2-1. Perry was the star performed finishing with 378 runs from eight innings – a record since the multi-format system was introduced in 2013 – at an average of 94.50. 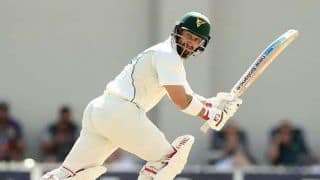