Kevin Pietersen praised Yuvraj Singh after the latter's unbeaten knock of 68 from 29 deliveries.

Yuvraj Singh came in for praise on Tuesday for his magnificent 68 not out which set up Royal Challengers Bangalore‘s (RCB’s) win over Delhi Daredevils in their Indian Premier League (IPL) 2014 match in Bangalore with rival team captain Kevin Pietersen describing him a superstar of the game.

“I can tell you something for free. That man [Yuvraj] batted like an absolute superstar. Recently, he got a lot of criticism but he has proven those people wrong,” Pietersen said after his side Delhi Daredevils lost by 16 runs.

“He was just unbelievable, hitting those sixes and taking his side to that score. I was always smiling [when he hit those sixes],” said Pietersen who has had run-ins with Yuvraj in the past over “pie-chucker” comment.

Yuvraj hit nine sixes and a four from just 29 deliveries in his sensational unbeaten innings of 68 to take Bangalore to 186 for four to set up a 16-run win.

The Englishman also conceded that it would be virtually impossible for his side to make it to the play-offs, having secured just four points from 10 matches to languish at the bottom of the eight-team league table.

“We have to build for next season as there’s an unrealistic chance of making it to the play-offs,” Pietersen said. 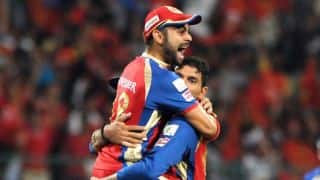