History: The World Cup finally moved to the Southern Hemisphere in 1992. With coloured clothing, white balls, black sightscreens, and cricket under lights, World Cup finally adopted the updated version of One-Day Internationals (ODIs), which had fittingly thrived in Australia over the 1980s.

The organisers had decided to do away with the concept of groups. The seven Test teams and Zimbabwe were scheduled to play each other (which would have amounted to 31 matches, a new record); the inclusion of South Africa — inducted after the schedule had been drawn — increased the count by eight more. This also made the edition extremely competitive. Every side won at least one and lost at least one match, and 1992 is often recognised as the best World Cup ever. The new structure also meant that India and Pakistan met for the first time in World Cup cricket.

One umpire was chosen from each of the nine participating nations (Australia and New Zealand were allowed two each). Rain played a key role throughout the tournament. The much-debated and hugely criticised “highest-scoring formula” was used to determine targets, which did not prove to be a very accurate measure on several occasions.

Australia, rank favourites going into the World Cup, were mauled by New Zealand, South Africa, and England, and somehow managed to scrape past India by a solitary run. Sri Lanka beat South Africa. Zimbabwe beat England. Sri Lanka chased down 313 against Zimbabwe. New Zealand won seven in a row. Pakistan and West Indies seemed to beat everybody and lose against everybody, and played a match that saw only two wickets fall. And the world got to see Sachin Tendulkar, Brian Lara, and Jonty Rhodes.

Pakistan dished out New Zealand their only two defeats, in consecutive matches. Unfortunately, the second of these came in a semi-final, which meant New Zealand were knocked out. Rain, somewhat cruelly, changed South Africa’s target of 22 from 13 balls to 22 from one, but on hindsight it seemed only fair.

The final saw Pakistan lose two early wickets, but a solid partnership between Imran Khan and Javed Miandad, followed by some late-order explosion from Inzamam-ul-Haq and Wasim Akram, took the score to 249 for six. England were reduced to 69 for four, following which Neil Fairbrother and Allan Lamb staged a fightback, adding 72. Wasim then delivered the killer blows, clean bowling Lamb and Chris Lewis with two absolute peaches off consecutive deliveries. England were bowled out for 227, Imran fittingly taking the last wicket.

Semi-final: Were South Africa really robbed of a victory against England?

Semi-final, England vs South Africa: When a fascinating match was ruined by farcical rain-rule

Final: Imran Khan’s Pakistan on top Down Under

– It was the first edition to be hosted in the Southern Hemisphere.

– It was the first tournament that involved coloured clothing, white balls, black sightscreens, and cricket under lights.

– The number of teams increased to nine.

– It is the only World Cup where the teams were not segregated into groups. There was one league involving all teams.

– Like 1983, every team won at least one match. It was the last edition when this happened.

– England became the first team to qualify for the semifinal five times. They would not qualify again for the next five times.

– It remains the only World Cup without a single five-wicket haul.

– The tournament will probably be remembered for Martin Crowe’s strategic skills: he put Mark Greatbatch at the top, opened bowling with Dipak Patel, and unleashed an army of slow medium-pacers — Gavin Larsen, Chris Harris, Willie Watson, and Rod Latham. It worked for the first seven matches.

– While New Zealand opened with Greatbatch, the World Cup saw a few other “pinch-hitters” like Kapil Dev, Ian Botham, and Tom Moody with mixed success.

– The two-ball match between India and Sri Lanka at Harrup Park, Mackay remains the shortest ODI.

– Martin Crowe became the first recipient of the Man of the Series award in the history of the tournament. 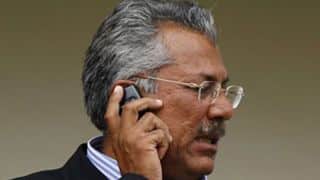