Chennai Super Kings (CSK) and Royal Challengers Bangalore (RCB) were engaged in a dramatic match for a berth in the Indian Premier League (IPL) 2015 final alongside Mumbai Indians (MI). CSK ultimately emerged victorious by three wickets to enter the finals for the sixth time in IPL’s eight-year history. Rishad D’Souza presents highlights from the match.

Uncharacteristically slow start for RCB: Usually Chris Gayle and Virat Kohli look to launch against every side they play, but today the Chennai Super Kings did a fine job in containing the openers. The pressure was piling on the openers and CSK bowlers had the opportunity to strike early. READ: CSK beat RCB by three wickets

Virat Kohli falls early: With the pressure building, Kohli started going for his shots even though the pitch was a tricky surface to bat on. He in fact, got hold of a couple of deliveries from Ashish Nehra in the third over, dispatching them for a six and a four. However, Nehra soon got his revenge, getting his wicket off a poor delivery as Kohli flicked a leg stump line ball straight to short fine leg. IPL 2015 Highest run-scorer: List of best batsmen in IPL 8

AB de Villiers’ wicket puts RCB on backfoot: AB de Villiers did not last long at the crease, scoring just one off two balls before being given out lbw in a slightly harsh call by the umpire. Anyway, he became Nehra’s second victim and his wicket put RCB on the backfoot early. IPL 2015 Highest wicket-taker: List of best bowlers in IPL 8

Chris Gayle steadies things: After the early wickets of Kohli and de Villiers, Gayle decided to curb his natural instincts to calm the innings for RCB. As the innings progressed, he hit the gas, but just when he was looking extremely threatening, he holed out to Raina off his own bowling. He got out for 41 off 43 balls. IPL 2015: Schedule with venue details

Sarfaraz Khan gives late impetus: Sarfaraz Khan scored 31 off 21 deliveries towards the end of the innings to take RCB to 139 for eight in their 20 overs. Given, the pitch conditions, RCB could have had a chance.

Dwayne Smith starts well: Smith produced a decent start for CSK in pursuit of 140. However, the slowness of the pitch became evident when the ball became soft and Smith couldn’t adjust. He got out 17 off 12 balls. IPL 2015: Complete Coverage

Michael Hussey-Faf du Plessis partnership: Michael Hussey and Faf du Plessis forged a good, useful 40-run partnership to bring CSK on track. They were a little slow, but since the target was not a massive one, it was alright. At that stage it looked like CSK would win the game quite comfortably.

Yuzvendra Chahal’s crucial over: Yuzvendra Chahal not only broke the partnership by getting du Plessis out, but forced CSK in a shell by getting Suresh Raina dismissed in the same over for a two-ball duck. From there, things started slowing down for CSK.

Hussey scores crucial fifty: Hussey carried on sedately. He was undeterred by the wickets and played in a way that he kept CSK within reach of the asking rate. He scored 56 off 46 balls before he was dismissed by David Wiese. However, CSK were brought well in range of victory by then.

Pawan Negi seals fate: After Hussey was dismissed, Pawan Negi came out and smashed a couple of fate-sealing victory. His six off Harshal Patel more or less turned the game in CSK’s favour. He was run out for 12 off six balls. Though small, his innings was of great importance.

MS Dhoni finishes it: With five runs to get off the last over, there was no way Dhoni was letting that slip away. He hit the first ball to long off and set off for two quick runs. With a dot ball next up, he then hit the third ball to cover for another couple. At this stage, with scores tied, Dhoni got out next ball edging to the keeper. But Ravichandran Ashwin ended the anticipation by taking a single next ball to get CSK into their sixth IPL final. 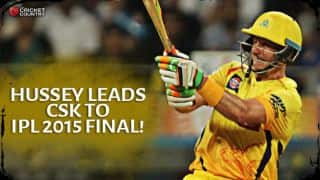