We have already established through these columns that Pakistan s bowling is its stronger suit in ICC Champions Trophy 2017.

Composed. Clinical. Thoroughly professional. These are not necessarily words that one would associate with Pakistan, but displaying these very traits in abundance, Pakistan tore the form book to shreds on its way to the final of the ICC Champions Trophy 2017. I must say I am surprised, at not just the fact that Pakistan got the better of England, but also the way it did so. The margin of victory by eight wickets with nearly 13 overs to spare is as comprehensive as you can get, and is indicative of the quality of cricket the two sides portrayed on the day. Mickey Arthur s vision of structured Pakistan more lethal than the unpredictables

Sarfraz Ahmed s decision to bowl first on a previously used surface at the Cardiff Wales Stadium was an interesting one. We have already established through these columns that Pakistan s bowling is its stronger suit. The call Sarfraz had to make on winning the toss was whether to bat first, put runs on the board and then back his bowling attack to defend whatever total it might stack up, or to hope for the bowlers to do the job up front so that the batsmen didn t have too many to chase.

In the event, he plumped for the latter option, and with excellent results. It was the kind of day Sarfraz would love to have over and over again. It was as if he couldn t put a foot wrong. Every move of his paid off, his bowlers were spot on when they could so easily have gotten carried away, and Pakistan fielded like it hasn t for a long time, putting pressure on England with its alertness and alacrity and even scoring a direct hit to pick up a wicket. Learn a lesson: do not make predictions about Pakistan cricket

Once it knocked England over for just a little over 200, it was going to be a fairly straightforward chase unless something dramatic happened at the top. Fakhar Zaman with his aggressive intent ensured that wasn t the case, and on a pretty good batting surface, the odds are hugely stacked in favour of the chasing side when you are only looking at 212.

Azhar Ali and Sarfraz himself are fine players, and the blend of experienced hands and new players meant Pakistan had the resources to chase down that modest target. You would have thought the team winning the toss would be looking to bat first in Cardiff, and I am pretty sure Eoin Morgan would have batted first had he won the coin-toss. At this ground, the average score batting first is around 300 and while chasing is about 260. CT 2017, PAK vs ENG, Semi-Final 1: Hasan s eventful 3-35 and other highlights

There is the scope for putting big runs on the board batting first, but the pitch ensured that it would be a battle of skill. The Pakistani bowlers have got the skill, there are a number of wicket-taking options and they proved too good for England. Once you have only 200-odd on the board, the pressure all goes on the bowling team in the second half of the game. Pakistan started very positively through Zaman and Azhar, and the very good start meant it was fairly regulation from then on.

I think again, it is a reflection that there is very little to choose between the top teams. If you are slightly off, if you are a little wrong in your execution or have a bad day, then you are gone, as England found out the hard way. The key thing is turning up on the day, in a game that matters. England has won key games throughout this tournament, including against Australia by which time it had already qualified for the semi-final. PAK ending 18-year drought, other stats highlights from their clash against ENG in Champions Trophy 2017

England will be disappointed at this result, but I do not think that will impact the way it plays the limited-overs formats. With the team it has and the way it plays, it is a very dangerous side, and I certainly think playing this way, aggressively and with intent, is its best chance of winning a tournament. This defeat, however, shattering it might be in its immediacy, is but a blip, and I don t think it will force a revisit of its strategy and approach.

For Pakistan to win, thus, and to do so without Mohammad Amir, will be massive for its confidence. To get a hiding in the first game, like it generally does against India, can knock your confidence out, but it has shown steel and resolve to bounce back from that defeat. Also, people forget that at the start of the year, it had tough tours of Australia and New Zealand alright, but leading up to that point, it was the No.1 ranked Test team in the world. It has had a couple of old soldiers step away, but it have always been known to bring in new talent.

Credit to Pakistan, and now it has every chance of winning the competition. I think everyone, and especially the sponsors, now will be wanting an India-Pakistan final at The Oval on Sunday. That will be huge because there are large Indian as well as Pakistani communities in England. If Bangladesh defeats India and makes it through to the final, it will be really exciting for cricket. It will be massive for Bangladesh as well, seeing as this is its first ICC Champions Trophy appearance in a while.

You would think India has the edge, but Bangladesh has the talent, and if it turns up on Thursday, you never know. I am not going to commit anything, not after having been emphatically proved wrong by Pakistan! 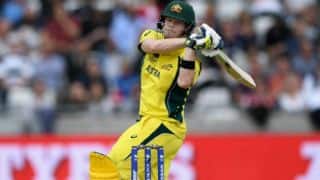