From the outside, the impression that India had missed a trick by not plumping for Jadeja ahead of Umesh gathered momentum as the day unfolded

Perth: In 530 previous Tests, India had fielded an all-pace attack just twice, with mixed results. At the WACA here in Perth, nearly seven years ago, Zaheer Khan, Umesh Yadav, Ishant Sharma and debutant R Vinay Kumar bowled Australia out for 369 despite a sizzling 180 at better than a run a ball from David Warner, but India capitulated to an innings and 37-run hammering after being shot out for 161 and 171 respectively.

The cricketing Gods were kinder in Johannesburg this January on a spiteful Wanderers surface that shocked the bejesus out of the home side. South Africa were so wary of the vagaries of an unpredictable pitch that they were desperate not to carry on a surface of their own making, a track on which India s batsmen had put life and limb on the line. India s reward was a vastly satisfying 63-run in a dead rubber, Bhuvneshwar Kumar, Jasprit Bumrah, Ishant and Mohammed Shami having South Africa s number.

Already the common factor, Ishant completed a hat-trick of sorts at the Perth Stadium s debut as a Test venue on Friday (December 14). Even a cursory look at the drop-in surface encouraged beefing up the pace resources; R Ashwin s unavailability through injury perhaps made the think-tank s task that much easier.

Resisting the urge to replace the offspinner, who took six wickets in the Adelaide victory with left-arm spinner Ravindra Jadeja, Virat Kohli drafted Umesh Yadav into the playing XI to form a pace-oriented pack alongside Ishant, Bumrah and Shami. Hanuma Vihari, the only reserve middle-order batsman, took his place instead of the injured Rohit Sharma, the fact that he bowls tidy off-spin perhaps precipitating Umesh s inclusion ahead of Jadeja.

From an Indian standpoint, this has to go down as a bold move. There has been precedent, as mentioned earlier, but both the WACA Test in January 2012 and the Johannesburg game six years later were the third Test of each series, and India were already 0-2 down in both instances. In many ways, Mahendra Singh Dhoni and Kohli respectively had less to lose then than here, what with the Indians now sitting on a rare 1-0 advantage overseas with three to play.

By itself, the call was interesting. To sacrifice a spinner on a surface that seemed to have plenty of juice, and most certainly was adorned by generous dollops of live grass, might have appeared the most straightforward decision. The forecast for day one of the second Test was extreme heat the temperature tipped the 39.2-degree Centigrade mark by late afternoon and the gentle cracks that snaked the length of the pitch are expected to open up as the game progresses. And, you pick a bowling group for the entire duration of the Test match, not just the first day or the first innings.

Australia, as much the home of pace as India is the land of spin, stuck to the same attack that did duty in Adelaide three pacers to be complemented by the off-spin of the excellent Nathan Lyon. At the same venue two and a half weeks back, in a Sheffield Shield game, Lyon had taken three for 34 and four for 86 to energise New South Wales 104-run drubbing of Western Australia. He will be a factor throughout this Test, as he has been for a long time now across the globe in the longer format. That Australia placed their faith in the spin basket, and India chose not to, made for an intriguing contrast.

ALSO READ: Perth Test is just the third time India have gone for an all-pace attack

Vihari was more than just a bit player on Friday, sending down 14 overs while finishing with two for 53. He also watched with consternation the garrulous Rishabh Pant put down a regulation offering behind the stumps from Shaun Marsh. Vihari s induction into the attack might have been precipitated by the need to catch up with the over-rate and to give the quicks a breather, but as he extracted substantial bounce, Kohli was happy to keep him on for longer periods. His final spell read 11-0-43-1; seldom has he bowled as many overs on the trot even in domestic cricket.

The Andhra skipper produced a snorter to evict the well-set Marcus Harris in a manner not too dissimilar to how Ishant accounted for Travis Head in the second innings in Adelaide. Operating from round the sticks, he got the ball to land in the crack at a short of good length. The left-handed Harris shaped for the cut, which was very much on, but watched in horror as the ball came in with the arm sharply and exploded off the crack. He was just halfway through his stroke when the ball thudded into his gloves and gently lobbed to slip. Harris had grounds for objection. Since when was a spinner allowed to bowl a bouncer?

Vihari couldn t quite provide the control that Jadeja would most definitely have, but he wasn t profligate either. The No. 6 batsman will probably have a bigger role with the ball in the second innings following the wear and tear of the next couple of days. From the outside, the impression that India had missed a trick by not plumping for Jadeja ahead of Umesh gathered momentum as the day unfolded. Jadeja s batting on a pitch that quickened up post lunch on day one would have been an additional bonus. The four-pacer punt hasn t exactly produced the results Kohli and Ravi Shastri would have hoped for, though that had a lot to do with the inconsistencies of Umesh, primarily, and Shami, to a lesser extent.

With Australia closing in on the 300-mark, India know they are in for a scrap. For now, they can ill afford to wonder if they would have been better served with Jadeja in their midst, but at some stage on day three or thereafter, that thought will flit through Kohli s mind. More than once. 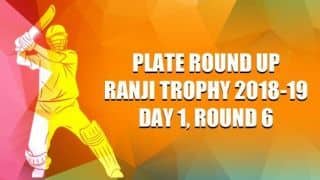