Aged 18, teenaged batting sensation Prithvi Shaw was on Thursday named in India s 18-man Test squad for the remaining two matches against England at Southampton and The Oval.

Shaw s maiden selection to a senior India side comes after he has churned out runs for virtually every representative Indian team has he played for. In four first-class matches for India A, Shaw has scored 406 runs at an average of 50, with two centuries and one fifty. In 10 List A games for India A, he averages 44.20 with two centuries and one fifty. Overall, in 14 first-class matches, he averages 56.72 with seven hundreds and five half-centuries.

Then there is at the small matter of captaining the India Under-19s to the junior World Cup at the start of the year, in which he scored runs and led with maturity under the guidance of Rahul Dravid, who is also the India A coach.

But Shaw has, ostensibly, been picked for the two remaining Tests against England at the expense of an ageing and out of form Murali Vijay, because he has reeled off a combined 759 runs for India A (in four first-class and six List A matches) with four hundred and two fifties. While with India A in England for a month this summer, Shaw scored 188 and 62 in two four-day matches and two List A centuries. Currently in India with the A team playing South Africa A, he scored 136 in the first unofficial Test.

This strong run of form, allied with Dravid s recommendations, have earned him a maiden Test call up at the tender age of 18.

When the likes of Sachin Tendulkar and Sunil Gavaskar speak effusively of your batting skills, you clearly are special. Shaw turned heads in local Mumbai cricket circles since he was a child. At 14, he scored a mammoth 546 off 330 balls for his school Rizvi Springfield in the Harris Shield – at the time the highest individual score in school cricket. Next, he headed to the Yorkshire leagues to play for club side Cleethorpes CC, where he had a highest score of 52 and also took five wickets in an innings. Not long after, he signed a record deal worth Rs 36 lakh with bat manufactures Sanspariels Greenlands.

In 2016, he was a member of the India U-19 squad that won the youth Asia Cup. Two months later, he scored 120 on first-class debut in the 2016-17 Ranji Trophy semi-finals, the first Mumbai batsman to do so in more than two decades. In the final, Shaw made 71 and 44 as Mumbai lost to Gujarat. He then went on to score a century on Duleep Trophy debut (154) to put India Red on course for title triumph.

In his first full season of Ranji Trophy cricket, Shaw made 537 runs at 48.81, with three centuries. He was India U-19 s third highest run-getter in a 5-0 one-day series sweep of England U-19s, and then named captain of the squad to play the U-19 World Cup in New Zealand.

At the 2018 IPL player auction, Shaw was purchased by Delhi Daredevils for Rs 1.2 crore. He was given a chance a few weeks into the tournament and finished the season with 245 runs at a strike-rate of 153.12, with two fifties. 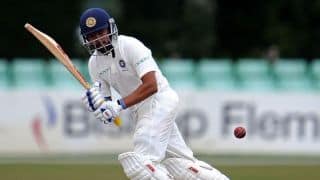