Among the the top innings, top spells, team of the year, player of the year, one of the most critical part of a year end package are the controversies that hit the sport

Among the top innings, top spells, team of the year, player of the year, one of the most critical part of a year end package are the controversies that hit the sport. This year, the Sandpaper Gate rocked Australian cricket to the core and robbed cricket fans on seeing one of the modern greats in Steve Smith, and there seems to be no end to the controversy.

The Indian cricket s biggest controversy of the year came after the highest of highs of women s cricket, when they made it to the semi-final of the ICC Women s World T20. The Mithali Raj–Ramesh Powar saga became ugly and put all the parties involved in embarrassing situations.

The Australian ball-tampering scandal rocked cricket to its core, resulting in the suspension of three players, head coach Darren Lehmann and most of the Cricket Australia administration on their way out. Questions were initially raised when images on the big screen at the Newlands during the day three of the third Test showed Cameron Bancroft putting an unidentified object in his pocket, with the Australian batsman misleadingly revealing a black sunglasses cloth to the umpires when they called him over.

A sheepish Bancroft confessed to using some yellow tape and granules from the rough patches of the wicket to try and doctor the ball. But a statement from Cricket Australia later contradicted the explanation, who said the player had attempted to artificially alter the condition of the ball using sandpaper .

Captain Smith admitted that the leadership group were aware of the decision and that they aren t proud of it. He refused to resign and believed he was the right man to lead. However, after pressure mounted from all quarters, including the Australian government. Smith and his deputy David Warner stepped down from their roles on Day Four of the Test, with Tim Paine taking charge.

Captain Smith and vice-captain Warner were suspended from all international and domestic cricket for a year. Smith and Warner were also barred from this year s Indian Premier League, losing contracts worth nearly US $2 million each, while Bancroft was banned from cricket for nine months.

The incident sparked condemnation from the public back in Australia, where the role of national cricket captain is widely seen as the second most important job in the country behind prime minister.

The appointment of former India opener WV Raman as the coach of the India women s cricket team draws to a close, hopefully, a turmoil-ridden period for the women s team after the spat between former coach Powar and veteran player Mithali went public and veered into ugly territory with all parties involved finding themselves in embarrassing situations.

It all started with veteran Mithali – despite being fit- not being picked for the crucial ICC Women s World T20 semi-final fixture against England, which India eventually lost and the Mithali s non-selection created furore. The issue was escalated when, Mithali in an open letter lambasted Powar and CoA member Diana Edulji, stating that she was humiliated by the coach and few people in power are out to destroy me. Harmanpreet Kaur s call to support the decision of the coach was baffling and hurtful, she added.

After nearly two weeks of to and fro, BCCI invited fresh applications for the coach s position and and Raman was given the job. However, Edulji called the process of appointment of the women s cricket team coach as unconstitutional and illegal.

In a bid to chase 417, AB de Villiers was run-out for a golden duck on day three of the first Test at Kingsmead in Durban. De Villiers dismissal saw a fiery reaction from Warner who was responsible for the fielding effort. Warner had been involved in a war of words with Aidem Markram after running de Villiers out. However, at tea, Quinton de Kock and Warner were seen involved in a heated argument as players headed to their dressing rooms. The CCTV footage showed Warner pointing and unleashing a verbal barrage at de Kock before the former was restrained and pulled away by Usman Khawaja, Smith, Nathan Lyon and Tim Paine.

David Warner was fined 75 per cent of his match fee and given three demerit points following a bust-up with South Africa s de Kock as the players went to the dressing rooms at the tea interval on day four.

Warner claimed de Kock made disgusting, vile comments about his wife, capping a niggly contest in which Lyon was also fined for his reaction following the run out of de Villiers.

The Nidahas Trophy match between Sri Lanka and Bangladesh witnessed an ugly incident between the players. Shakib Al Hasan who was playing (and leading) his first match in the series livid towards the end over a no-ball that was not indicated. Shakib rushed towards the boundary line and almost called Mahmudullah and Rubel Hossain off an act which would have resulted in Bangladesh conceding the match.

Shakib was seen furious while talking to the fourth umpire near the boundary line. Both Shakib and substitute fielder Nurul Hasan were found guilty of breaching level 1 of ICC s code of conduct, which calls for 25 per cent fine and one demerit point each.

The incident stretched outside the ground as well: the glass of the Bangladesh dressing-room was found broken after the match. ICC match referee Chris Broad had a look at the CCTV footage of the incident and found it inconclusive. However, according to reports mentioned by DNA, the caterers revealed that it was Shakib who did it.

ICC charged Sri Lanka captain Dinesh Chandimal, with changing the condition of the ball under Article 2.2.9 of ICC s code of conduct. Chandimal was accused for tampering with the ball during the second Test against West Indies at the Darren Sammy International Stadium, Gros Islet, St Lucia. The Sri Lankans took field after a two-hour delay, under protest, after umpires Aleem Dar and Ian Gould asked for the ball to be changed after play on Day Two. Sri Lanka Cricket later released a statement defending its cricketers. 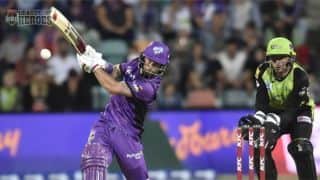