The success of the fringe players in the 3-0 T20I win has inspired England, feels Woakes.

Chris Woakes believes that the depth in England‘s bowling stocks augurs well for the No 1-ranked ODI team ahead of the 2019 ICC Cricket World Cup.

Eoin Morgan‘s top-ranked team have been tipped as one of the favourites for the World Cup, and Woakes has backed the core group of bowlers to deliver.

“A lot is spoken about our batting given the strength we have with the bat, it’s up there with the best in the world, we realise that is one of our strengths but I think we’ve done some really good stuff with the ball over the last few years as well,” the allrounder wrote in his column for Sky Sports.

“Sometimes that goes unnoticed because of how good we are with the bat. It’s great to see some of the guys putting their hand up, it’s not in the ODI format but whenever you get an opportunity, it’s good to put in strong performances and show everybody what you can do – the guys who have been out in the Caribbean for the T20s have certainly done that.” (READ: Woakes dismisses concerns surrounding dodgy knee)

After being held to a 2-2 tie in the ODIs against West Indies, England stormed to a 3-0 sweep in the T20Is. In that rout, pace bowler Chris Jordan was Player of the Series for taking six wickets, including 4/6 in the second game. The left-arm quick David Willey was Man of the Match in the final T20I with career-best figures of 4/7, and in that same game Mark Wood took 3/9 in three overs. (READ: David Willey’s 4/7 makes him a World Cup contender: Mark Butcher)

After the first T20I, Morgan singled out the legspinner Adil Rashid for his 1/15 in four overs and lauded Jordan for taking 2/16 in three.

Rashid added to his credentials with 2/12 from three overs during the series-clinching second T20I. Also leaving an impression was the allrounder Tom Curran who took 4/36 in the opening game. (READ: Fringe players could play Pakistan ODIs: Bayliss)

“We’ve been a really strong unit since the last World Cup, so hopefully we can maintain that and I’m desperate to be a part of that,” said Woakes. “I’m not alone in that, of course, and a few of the guys in the T20 squad really pushed their cases in the series against the Windies. I think it’s great for the bowling unit to see the depth we have.

Willey and Jordan – who has not played an ODI since 2016 – are hopeful of making England’s World Cup squad, and the uncapped pace bowler Jofra Archer is a serious prospect after being spoken of highly by Morgan and coach Trevor Bayliss. 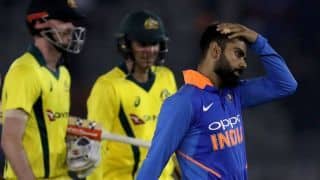