Varun Aaron and Saxena pocketed two apiece to complete the rout as India A walked away with a comfortable 252-run lead.

Mysore: Fast bowler Navdeep Saini and left-arm spinner Shahbaz Nadeem shared six wickets between them to help India A skittle England Lions for 140 on the second day of the unofficial Test at Mysore on Thursday. At stumps, following on, the tourists were 24 for no loss as India A called the shots for a second consecutive day.

Resuming from the opening day at 282/3 which came on the back of a century knock from Bengal batsman Abhimanyu Easwaran and captain KL Rahul, who narrowly missed a ton, India A failed to capitalise on their good start and lost the remaining seven wickets for just 109 runs as the hosts folded for 392.

Out-of-favour Karnataka batsman Karun Nair, overnight on 14, departed without adding any score to his total after he was dismissed Zak Chappell, who returned four overs later to clean up Mumbai batsman Siddhesh Lad for just 9. (ALSO READ: No hundred yet, but with twin eighties KL Rahul makes progress with India A)

Chappell, who was the pick of the bowlers with four for 60, was in menacing form as he got the better of Jalaj Saxena, who added just 1 to the total. Wicketkeeper-batsman Srikar Bharat s 46 was the only significant contribution on the day, his 53-ball propped up by six boundaries and a solitary hit over the fence before he was dismissed by Danny Briggs, who returned with figures of three for 71 in his 13.4 overs.

In reply, Saini and Nadeem worked in tandem as England Lions found themselves half their side down with just 76 on the board in the 25th over.

Max Holden was the first to depart after he was trapped lbw by Saini for 19. None of the English batsmen were able to cross 30 with Ollie Pope top scoring with 25 before he was sent back to the pavilion by Saini. Skipper Sam Billings managed to add five before he was castled by the Delhi pacer. (ALSO READ: 81 for KL Rahul as India A end Day 1 at 282/3)

Varun Aaron and Saxena pocketed two apiece to complete the rout as India A walked away with a comfortable 252-run lead.

Saini returned with exceptional figures of 3 for 30 in his 10 overs, while Nadeem was not too far behind, going for 32 in his 9.4 overs. 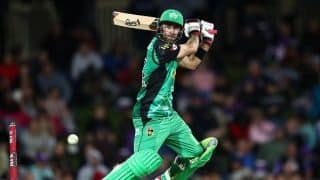