Jason Roy and Craig Overton were dropped, who were part of the team in the fourth Test, were dropped from the playing XI for the fifth Test.

Sam Curran and Chris Woakes replaced Jason Roy and Craig Overton as England made two changes to their playing XI for the fifth and final Ashes Test to be played at The Oval in London.

Ben Stokes, England Test vice-captain, will play the final Test as a specialist batsman due to his shoulder injury.

Roy was picked in England’s Ashes squad following his ICC World Cup 2019 heroics and on the back of a fifty in his debut Test against Ireland.

However, the right-hander, who could score only 110 runs across four Tests, failed to replicate his success in the limited-overs as an opener and was asked to bat in the middle-order in the fourth Test.

Overton was picked in the squad for the fourth Ashes Test and played ahead of Woakes, who had played the first three Tests, failed to make an impact with the ball and returned with just two wickets against his name in Manchester.

While Australia have retained the Ashes after their first series win on the England soil since 2001, England still have a chance to draw the series if they manage to beat Australia in the series finale. 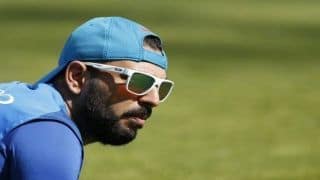