Bangladesh opening batsman Tamim Iqbal said it would be difficult for the national cricket team to overcome the shock of narrowly escaping the shooting.

The Bangladesh cricket team arrived home in Dhaka on Saturday, a day after narrowly escaping the mosque attack that killed 49 people in New Zealand.

At least 17 members of the Bangladesh cricket team drove up to Christchurch’s Masjid al Noor mosque in a bus to join Friday prayers when a gunman stormed the building, in what is thought to be the worst act of terror directed against Muslims in a Western country. (READ: Christchurch attack will change fabric of international sports hosting NZC CEO)

“The only thing I can say that we are very lucky,” skipper Mahmudullah Riyad told reporters after arrival.

“With all of your prayers… now we could return here alive. I cannot describe what is going inside us, what we have seen,” he added.”

“All of us in the team could not sleep properly. The only thing that popped up in our mind was how lucky we are.” (ALSO READ: Hope we can overcome the trauma with time: Tamim Iqbal)

The team arrived at Dhaka airport late Saturday, according to Bangladesh Cricket Board spokesman Rabeed Imam.

The team was in Christchurch for their third and final Test match against the home side scheduled to begin Saturday, which was promptly cancelled to allow the cricketers to return home as soon as possible.

They stayed in the bus for eight to 10 minutes before leaving it after sensing danger, according to Mashud.

Bangladesh opening batsman Tamim Iqbal said it would be difficult for the national cricket team to overcome the shock of narrowly escaping the shooting.

“It will certainly take some time for us to get out of it after the experience we had here,” he told reporters at Christchurch airport, moments before the team left for Bangladesh. (ALSO READ: Christchurch mosque shooting: Bangladesh cricketers want to leave New Zealand as soon as possible)

“It is better that we are returning… because everyone’s family is worried. I just hope after returning home we can overcome it with the passing of time,” Tamim said.

Dhaka complained that players were not provided with any security when they travelled to the mosque.

“In future, whenever we send our cricket team abroad we will do that after examining and reviewing the security matters of the host countries,” Prime Minister Sheikh Hasina said Saturday, according to the state-run news agency BSS. (ALSO READ: ICC backs cancellation of Christchurch Test after mosque attack)

England’s cricket team was provided security equal to that of a head of a state when they visited Bangladesh in 2016, months after one of the worst extremist attacks on foreigners in a Dhaka cafe. 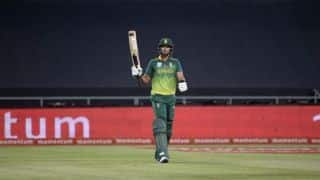