The second Test which begins on November 11 at the Shere Bangla National Stadium in Dhaka.

If Bangladesh steamrolled over Zimbabwe in the three-match ODI series, the Tests had a different story to tell. Zimbabwe recorded their first Test win in five years, and more importantly, ended a 17-year wait for an overseas Test win after crushing the hosts by 151 runs in the first Test at Sylhet.

Bangladesh coach Steve Rhodes reckons the home side need not panic, but he s certain that they will bounce back strong in the second Test which begins on November 11 at the Shere Bangla National Stadium in Dhaka.

“These guys are really determined to put things right and that’s what I love about the Bangladeshi dressing room. They keep surprising me, and they keep bouncing back. Everybody has a bad day. We had a really bad day’s work in that first innings while batting,” he said.

Bangladesh folded for 143 in reply to Zimbabwe s 282 in the first innings. In the second innings, Bangladesh had their noses ahead in the game, but a batting collapse saw the hosts bundled out for less than 200, the eighth time on the trot.

“Certainly, the only thing that went wrong in this game was our batting in the first innings. We lost the toss when there was not much happening, and we did a great job in bowling them out for 282. Then, we needed 350 or 400 and if we didn’t get that score then it was always going to be difficult batting last,” said Rhodes.

The failure of the batsmen has led to concerns if selectors have done their job. However, Rhodes threw his weight behind the current group of players.

“In the NCL [first-class tournament] the guys that are playing now [in the national team] are scoring a lot of runs and they are actually scoring more runs than some of the guys that are being mentioned,” said Rhodes.

“Shanto [Nazmul Hossain] made a 180, [Liton] Das made 200, Mominul [Haque] made 100 not out in his last game. Ariful [Haque] with a double century…so there is plenty of runs being scored there.

“And these are good guys, they are good players and at the moment I feel we’ve got our best players bar Tamim Iqbal and Shakib Al Hasan, and so at the moment we are backing these guys. I will like a better result in the (second) Test match, but we will be working hard with the crop we have got,” he said. 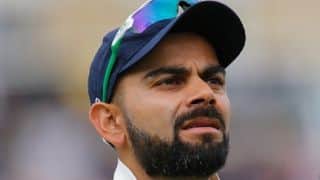