Evin Lewis belligerent 71 not out coupled with Anamul Haque (39 off 32), who played the support cast, helped Comilla Victorians to a thumping eight-wicket win against Rangpur Riders in a Bangladesh Premier League (BPL 2019) match on Monday. Victorians have thus qualified for the final, while Rangpur another chance as they face Dhaka Dynamites, who won the Eliminator earlier in the day.

Opting to bat, Rangpur were helped to 165/5 in their 20 overs. West Indies star Chris Gayle finally managed to find his rhythm, but missed out on a fifty by four runs after he dismissed by Mahedi Hasan in the 11th over. Gayle tonked six boundaries and one six in his 44-ball knock. (ALSO READ: Narine s all-round show seals Dhaka Dyamites’ six-wicket win over Chittagong Vikings)

What boosted the innings was a brilliant showing by Benny Howell, who smashed three boundaries and five hits over the fence in his unbeaten 53 coming in just 28 deliveries. Rilee Rossouw added 44 before he was sent back by Mohammad Saifuddin.

In reply, the Victorians lost opener Tamim Iqbal for 17 off Mashrafe Mortaza in the fifth over. However, that was the only casualty in the innings. Lewis and Haque then conjured 90 runs for the second wicket a match-winning partnership that took the game away from Rangpur. (ALSO READ: Rangpur Riders thrash Comilla Victorians to go top)

The partnership was broken by Shafiul Islam, who cleaned up Haque for 39, but it was too little too late. Lewis, who carted five boundaries and three sixes en route to his 71* found an able partner in Shamsur Rahman (34 off 15) as the duo took their side home to victory and trigger wild celebrations in the Victorians camp. 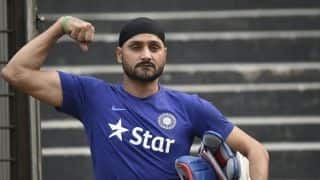