Dhaka Dynamites will meet Comilla Victorians in the final on Friday.

Chasing an under par 143-run target, the Dynamites lost opener Upul Tharanga for just four off Mashrafe Mortaza. However, Sunil Narine (14 off 8) and Rony Talukadar (35 off 24) ensured a solid start in the Powerplay. Despite a slight wobble in the middle when they lost Shakib Al Hasan (23 off 20) and Kieron Pollard (14 off 8), Dynamites managed to cruise to victory with Russell clobbering five sixes in 19 balls to kill the run chase as they romped home with 20 balls to spare. Dhaka Dynamites will meet Comilla Victorians in the final on Friday.

Comilla Victorians failed to register a challenging target after put into bat. Chris Gayle missed out and departed for just 15 off Hossain, who ended up with figures of fur for 23 in 3.4 overs. Ravi Bopara top scored with 49 off 43 his innings studded with six boundaries and a six. Mohammad Mithun was the next highest scorer at 38 off 27 which included a couple of boundaries and as many sixes. (ALSO READ: Sunil Narine s all-round show seals Dhaka Dyamites’ six-wicket win over Chittagong Vikings) 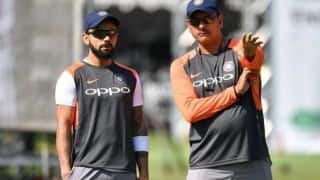