The bans handed down to the Australian trio of Steve Smith, David Warner and Cameron Bancroft for their roles in the ball-tampering scandal will remain as is, Cricket Australia (CA) unanimously ruled on Tuesday after reviewing a plea submitted by the players’ union to cut the penalties.

A seven-member CA board met on Monday via telephone conference to decide whether to overturn, partially overturn or keep the 12-month bans handed to Smith and Warner and nine-month ban on Bancroft – the player who was picked up by cameras attempting to tamper with the ball and then trying to hide the foreign object – following the Cape Town Test in March.

A plea put forth by the Australian Cricketers Association (ACA) after the findings of the Longstaff review into the culture to Australian cricket and how it is run was discussed when CA s board sat to deliberate the matter. The ACA argued in its submission that the ball-tampering scandal was not only the fault of the cricketers, but equally of Australia s win-at-all-costs mentality.

“CA maintains that both the length and nature of the sanctions remain an appropriate response in light of the considerable impact on the reputation of Australian cricket, here and abroad,” he said. “Steve, David and Cameron are working hard to demonstrate their commitment to cricket and have our continued support to ensure their pathway to return is as smooth as possible.”

It was also decided that no further calls for the bans to be reduced will be considered by the board.

“We believe the ongoing conversation about reducing the sanctions puts undue pressure on the three players — all of whom accepted the sanctions earlier this year — and the Australian men’s cricket team,” Eddings said. “As such, the Cricket Australia board doesn’t intend to consider further calls for amendments to the sanctions.”

While Smith and Warner were permitted to play T20 cricket in Canada and the Caribbean while they serve 12-year suspensions, Bancroft has since March only played in he Northern Territory Strike League. 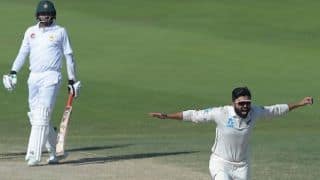