Live cricket has not been available on free-to-air TV in the UK since the 2005 Ashes.

In what is viewed as an unprecedented move for British television programming, the final of the ICC Cricket World Cup 2019 between hosts England and New Zealand at Lord’s on Sunday will be broadcast on free-to-air television in the UK.

Sky has agreed a deal with the World Cup broadcaster to show the match on July 14, a day which also features the British Grand Prix.

In the UK, Channel 4 will carry Sky’s coverage of the World Cup from 9:00am local time and then shift channels to More 4 at 1:15pm while Channel 4 airs the British Grand Prix. After the end of the race, the World Cup will switch back to Channel 4.

Sky showing the World Cup final on free-to-air TV in the UK is rare occasion, because since the 2005 Ashes live cricket has not been available on terrestrial TV. In 2004-05, the England & Wales Cricket Board awarded an exclusive four-year contract to BSkyB, ending a six-year association with Channel 4 which itself had in 1999 ended the BBC s 61-year run as the broadcaster of cricket in England. Since 2005, live coverage of England s home series were no longer made available on terrestrial TV.

Morgan termed the decision to show the World Cup final on free-to-air TV as “really important for cricket”.

“It’s cool, it’s great that everyone gets the chance to see it,” he said. “The 2005 Ashes was the moment for me when cricket became cool. That whole summer it was on all the front and back pages, everywhere. I don’t think we will understand the impact until after the tournament when the guys go home. We will be recognised more than before.”

Alastair Cook, England’s leading run-getter in Test cricket, hoped that this “fantastic move” from Sky would “inspire the next generation” of English cricket

“It’s a once on a lifetime opportunity for these players to play in a home World Cup and to have this opportunity to put it on free-to-air, so hopefully many more millions of people can watch it and hopefully see an England win. It can inspire the next generation,” he told BBC Radio 5 Live.

“If they win the World Cup, the first 50-over tournament England have ever won, it can only be a good thing for cricket. And then amazingly a week-and-a-half later we start an Ashes series so it could be a very, very special eight or nine weeks for English cricket.” 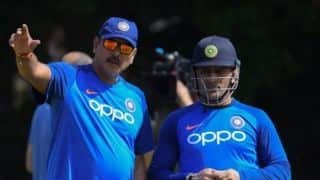