Karunaratne, having seen the Sophia Gardens pitch earlier, did not expect it to be so lively.

Sri Lanka have won one of ten completed ODIs in 2019. In January, they lost three in New Zealand. In March, they lost five in South Africa. In May, their first match with Scotland was washed out and the second they won by 35 runs.

On June 1, they were hammered by ten wickets by New Zealand in game three of the ICC Cricket World Cup.

Dimuth Karunaratne, the man who was named Sri Lanka’s World Cup captain in April, played his first ODI in over four years when they met Scotland a few weeks ago. He scored 77 from 88 balls, the highest score of Sri Lanka’s 322/8.

On Saturday, leading Sri Lanka in their first World Cup match, Karunaratne became the second batsman to carry his bat through an innings in the World Cup. The last one was Ridley Jacobs in the 1999 World Cup, also held in England.

West Indies endured a terrible campaign two decades ago, and Karunaratne must hope that his team doesn’t follow a similar path. His unbeaten 52 off 84 balls was the mainstay of Sri Lanka’s 139 all out in 29.2 overs.

After the match, Karunaratne wore a weary look as he searched for optimism amongst the ruins.

“I think batting is the main concern. You know, if you are losing wickets you can’t score 200, 250 runs. So we have to get some partnerships in the middle part,” he said. “We keep losing wickets, you know. We couldn’t get a partnership on that wicket, we kept losing wickets. I think that’s the main reason we can’t score, because of these conditions.”

Karunaratne, having seen the surface earlier, did not expect it to be so lively.

“I mean, no, because everyone is here to watch some entertainment. I thought the day before yesterday that they’d laid out the grass, but we thought it’s going to be cut. They left the same grass there,”he said. “I think if you take the World Cup, everyone wants to, you know, see a good match, good high-scoring match. So I think hopefully we’ll get good wickets on the next few matches. We will try to do our best.”

After Karunaratne’s 54, the second best score was Kusal Perera’s 29. Thisara Perera made 27. The rest subsided to pace, accuracy and bounce.

Did Karunaratne feel stranded by his batting team-mates?

“You know, if you take this wicket, you need to have a target. It’s not easy. It’s not a 300 wicket, so you need to have another game plan,” he said. “You can’t go there and hit every ball, so you have to stay calm, sometimes give them a chance, give us a chance to settle down. Once you get set you can score in these conditions. I think they bowled really well. I think all their players bowled really well, so we have to give them credit. And I think if we stay couple of overs in the middle, I think definitely this game would have been better.”

As Sri Lanka’s innings petered out, sections of the stands where their animated fans sat began to emanate loud boos. In Karunaratne’s opinion, it was fair given how poorly his team played.

“Everyone is here to see a good match,” he said. “They have come from far to Cardiff and they spend their time and money and come here to see [a] good match. I think we need to give them a little bit [of a] chance. They all want us to win, so I think losing doesn’t matter, but we need to give a good fight for them. I think that’s the main thing. If we get out for like 130, you know, there is no match. So we have to give them a good show end of the day.”

Eight matches remain, so all is far from lost for Sri Lanka.

“We need to keep our chins up and play very well. We need to see what we have. We lose, you know, and on the back end part we need to get some partnerships, the middle part. Those are the key areas. We’re looking forward to doing it,” said Karunaratne. 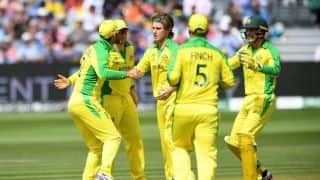