Ponting has questioned Aaron Finch’s place in the team as an opener, after the batsman was out for a duck.

Former Australia captain Ricky Ponting has questioned Aaron Finch’s place in the team as an opener, after the batsman was out without troubling the scorers on the second day of the first Test between India and Australia at the Adelaide Oval on Friday. First ball of the day, Australia dismissed Mohammed Shami, India’s last batsman, to have India all out for 250, after which Finch and Marcus Harris, playing his first Test, walked out to give Australia a strong start.

But third ball of the innings, Finch went for an expansive drive off Ishant Sharma and had his stumps rattled. Making his Test debut in the UAE, Finch started off his career in fine form, but Ponting feels conditions in Australia, coupled by a strong India bowling line-up is a totally different ball game.

“I think this problem has been created by picking him to open in the UAE,” Ponting told cricket.com.au. “It’s the easiest place in the world to be an opening batsman over there, as we know. And he did reasonably well over there which meant… they had to pick him to open the batting coming back here.

“What was the long-term objective to open the batting with him over there? Everyone knows he struggles a little bit against moving red ball and we have a series here and an Ashes series not too far away, and the ball’s going to move around a lot when we’re over in England.”

“The shot we saw today is not what a good Test match opener should do third ball of the innings. The new ball on that wicket was always going to be the hardest time to bat and he went for a hard cover drive. Sometimes that can happen, but he’s got a lot of work to do, I think.”

Ponting was also harsh on the shot selection of some of Australia’s batsmen. The likes of Usman Khawaja, Peter Handscomb and Harris, they all got starts but fell to some weak shots. Khawaja consumed 125 balls for his 28, while Shaun Marsh was out playing on to Ashwin. Handscomb chased a delivery outside off to edge Bumrah to Pant and so did Tim Paine as Australia slipped to 127 for 6 before Travis Head took the pressure off with a half-century.

“I’m not here to bag anyone about the way things are happening, but you look at some of the shot selection today and it makes you wonder a little bit,” he said. “I had no worries at all about the group coming in in terms of form and those sort of things, it just highlights that they might be a fair way off the mark.

“It’s pretty hard to accept that we have 10-15 batsmen in Australian first-class cricket and only a couple of them average over 40. That’s unacceptable as far I’m concerned. So you’ve got to look at the levels of coaching on the way up and what’s not happening and try and find ways to improve it.” 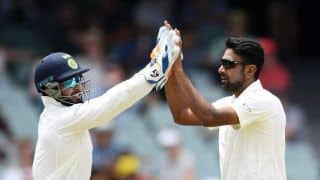