Langer said that he needs to be patient with the side under Tim Paine.

The Indian pace bowling contingent of Ishant Sharma, Jasprit Bumrah, Mohammed Shami and in particular, offspinner Ravichandran Ashwin, did well to keep the lid on the Australian batsmen picking up seven wickets on Day 2 of the first Test at Adelaide on Friday.

Ashwin was the pick of the bowlers with three wickets in his 33 overs going for 50 runs. For most part of the day, run-scoring proved difficult for Australia. The run-rate never exceeded 3.0 in any of the three sessions.

Australia s defensive mindset in their own backyard was surprising to Sachin Tendulkar. #TeamIndia should make the most of this situation and not lose their grip. The defensive mindset by the Australian batsmen at home is something I ve not seen before in my experience. @ashwinravi99 has been very effective and has played a role to help the team be on top, for now, he tweeted on Friday.

#TeamIndia should make the most of this situation and not lose their grip. The defensive mindset by the Australian batsmen at home is something I ve not seen before in my experience. @ashwinravi99 has been very effective and has played a role to help the team be on top, for now.

Australia head coach Justin Langer conceded the run-rate was low, but he was happy with the approach adopted by the hosts, who are coming off a harrowing time in the aftermath of the ball-tampering scandal. However, he said that there won’t be any sort of antics like India captain Virat Kohli’s in the Test series. “If we did that at the moment we’d be the worst blokes in the world,” Langer told Fox Cricket on Saturday.

“It’s a fine line, isn’t it? That’s the truth of it. But I love seeing the passion.”

He did not hesitate to say that the Indian batsmen adopted the same approach and got bowled out. “But go back a day, against a very experienced Indian side, and they did the same thing. When they went for their big drives we got them all out,” Langer said.

“It’s got a lot to do with this wicket, it’s got a lot of grass on it it’s really, really hard work, it’s nipping around, you never really quite feel like you’re in.”

According to Langer, Tendulkar, who played his first match against Australia in 1991, faced a different set of players as compared to the inexperienced batting side, evidently missing Steve Smith and David Warner, serving suspensions.

“The teams that Sachin would have played against started with Allan Border and David Boon, and Steve Waugh and Mark Waugh, and Ricky Ponting,” he said.

“Guys that had great Test match experience and they knew their game, were comfortable in their own skin and they knew what to expect. Whereas we’ve got a team at the moment who are very inexperienced in Test match cricket, particularly our batting side.

“They’re just fighting as hard as they can, they’re fighting their backsides off, they’re always looking to score but the wicket is tough, and it’s a slow outfield. That’s the beauty of Test cricket, it’s bloody hard work.

He admitted though that Australia could have attacked Ashwin a little better. “Particularly our lefities, we need to have methods of scoring on both sides of the wicket,” he said.

“There’s areas we can get better at, but I’m definitely not getting caught up in this ‘we’re too slow, we’re not attacking enough’ business.” 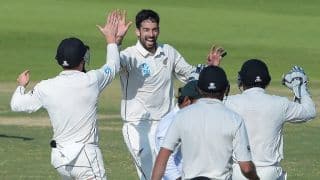 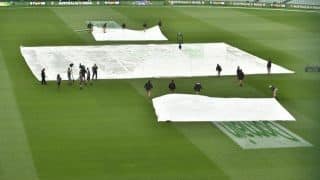