Dean Jones has apologised to the Australian cricket team for believing they won't be able to beat India.

Dean Jones has apologised to the Australian cricket team for thinking they won’t be able to beat India in the recently concluded two-match T20I series. (ALSO READ: Last chance for India to iron out kinks before WC)

Glenn Maxwell was the star as Australia scoring 56 and 113* across the two matches in Vizag and Bengaluru as the tourist won 2-0 for their first ever bilateral T20I series win against India.

“I have to apologise profusely to the Australian cricket team,” Jones wrote in his column for The Times of India. “I didn t see that coming; I didn t think they d be able to beat the Indians but they did it. They had a very professional, well-orchestrated performance against this very strong Indian T20 team.”

Praising Maxwell’s performance, Jones said his demand to be promoted in ODIs has to be conceded and the big-hitting batsman has to be show more consistency. (READ: Aaron Finch s 100th ODI – His five best innings)

“Glenn Maxwell puts bums on seats. His hundred on Wednesday was electrifying but what we need from him is consistency especially with the One-day series about to start. He hasn t put two good scores back-to-back since 2015 where he hit 95, 66, 1, 88, 102, and 44 not out. We have always known that he has the game but consistency has been the problem. And he needs to bat at No. 5 in ODIs for Australia,” he wrote.

Jones, who played 52 Tests and 164 ODIs between 1984 and 1994, hopes Australia will carry their T20I form into the ODIs as well and felt India have to improve their bowling.

“India have to improve their bowling, there s no doubt. That can be easily rectified; they just need to do better analytics on the Australians, be more patient, hit the right markers and the right lines and lengths under pressure, and they should come out of it,” he said.

The first ODI of the five-match series will be played in Hyderabad on Saturday. 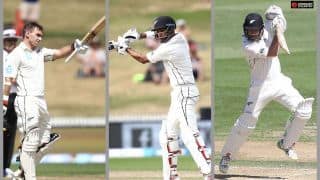