England bowled India out for 345, sealing the match by 118 runs to give Cook a winning farewell and finish the series 4-1.

India came up with the best fourth innings batting of the series, yet it wasn t enough to save them. Chasing 464, and at one stage reduced to 2/3, India were injected a fresh lease of life through KL Rahul and Rishabh Pant, both scoring centuries and putting on a fighting 204-run partnership for the sixth wicket. The alliance not only raised hopes of a miraculous escape, but even allowed India to harbour hopes an improbable win. With 166 needed in 33 overs and five wickets in hand, it was anyone s call. Rahul and Pant had earlier set ablaze the IPL this year and India would have fancied a little bit of that T20 action to go out on a high.

But all their efforts did was delay the inevitable. Once Rahul and Pant departed in quick succession, England completed the formality and bowled India out for 345, sealing the match by 118 runs to give Alastair Cook a winning farewell and finish the series 4-1. India s last wicket to go down was that of Mohammed Shami, who became James Anderson s 564th Test wicket, the most by a fast bowler in history.

The margin could have easily been 3-1, or even 3-2 the way Pant and Rahul were batting. They scored 131 runs in the afternoon session at over 4.1 runs an over. It was an entertaining two hours of play. While the first session was dominated by Rahul s bold and audacious hitting, Pant s fearless striking post lunch brightened India s chances of doing the unthinkable. He joined Rahul when five Indian batsmen were already back in the dressing room and another huge loss was on the horizon.

Against all expectations, Pant set on a mission. First was to make up for all those byes he had conceded. Once he went past it, the shots came out. On a slow and comparatively easy surface, Pant launched an array of shots, playing the only way he knows. After all, he has a first-class triple century to boast.

Pant thumped a one-handed six off Moeen Ali, after which he was content playing out till lunch. Post it however, there was no looking back. He went to his fifty with a crunching punch off the backfoot and raced his way to enter the 80s. On 87, he launched Adil Rashid over the deep-midwicket boundary and followed it with a slog sweep that took Pant to the three-figure mark, making him the second youngest centurion by a wicketkeeper behind another Indian, Ajay Ratra. The Oval has been kept busy this Test but stood up to applause a gutsy knock from a player who is just 20 years old.

Before Pant s fireworks, Rahul was the aggressor in an eventful morning session. India played out a promising first hour of play. The opener, playing his final innings of the tour, did himself plenty of favours by scoring at a brisk rate and brought up his century, fifth overall, first in England, but perhaps the most inconsequential of his career. He looked at ease against Moeen, employing back-to-back reverse sweeps for four off the offspinner. Then, on 87, he took Ben Stokes for a six and a couple of boundaries to bring up only the third century by an Indian in the series, one that India could have really done with earlier.

Rahul forged just the seventh hundred partnership of the series with Ajinkya Rahane, who was circumspect early on and was happy knocking the ball around. But there was absolutely nothing in the pitch. A few balls took off and beat the edges but that s all it had to offer. One over from Stokes resulted in eight leg byes, but Rahane was able to connect a couple of crunching drives off Sam Curran soon after which seemed to have gotten him in groove.

England were content giving Anderson and Stuart Broad rest and didn t have them bowl after the opening spell till half an hour before tea. But seeing Pant and Rahul motoring along, they were brought back. Despite that, England could not seize the advantage of pushing India on the backfoot with back-to-back dismissals of Rahane and Hanuma Vihari before lunch. India were cruising along.

It took a magical delivery from Rashid to break the threatening double-century stand. The legspinner, bowling round the wicket landed the ball in the rough and it spun sharply to take out Rahul s off stump. Two overs later, he foxed Pant with a googly and the batsmen holed out to long off. From there, it was just a matter of time. Curran took out the next two, and the stage was set for Anderson to surpass Glenn McGrath, which he did by going past Shami s defence.

Despite becoming the most successful fast bowler, Anderson decided to stay back, behind the individual around whom this Test match was built. Cook couldn t have asked for a farewell better than this. 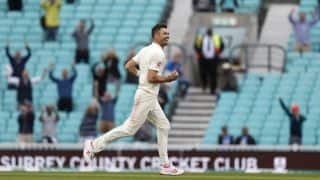