Deepak Chahar, in his second T20I, was named Man of the Match for taking 3/4.

After his team took an unassailable 2-0 lead in the three-match T20I series versus West Indies over the weekend in Florida, India skipper Virat Kohli hinted that changes were on the cards as the tour continued on Tuesday in Guyana where the teams contested the final T20I.

On game day, after a rain delay, it was revealed that India had indeed made three changes for the third T20I: in came KL Rahul and the Chahar cousins, pace bowler Deepak and legspinner Rahul, who made his debut for India.

Deepak Chahar, playing his second T20I for India, had the biggest impact with a terrific and match-winning spell of 3-1-4-3 to stun West Indies who were put in to bat.

India chased a target of 147 by seven wickets to sweep West Indies 3-0, after which Kohli singled out Deepak for his “lethal” skill with the new ball.

“We wanted to try out a few players here but the priority was always to win the game. Deepak is similar to Bhuvi [Bhuvneshwar Kumar]. With the new ball, his skill is really up there with Bhuvi. Swing has been his USP in the IPL too. He is really lethal with the new ball … puts the batsmen in real trouble,” said Kohli.

Deepak struck with his fifth ball, getting makeshift opener Sunil Narine caught at mid-on when trying to slog across the line. In his next over he had Evin Lewis and Shimron Hetmyer both trapped lbw with sharp movement inwards to the two left-hand batsmen.

He bowled 14 dot balls out of 18 in all. After the win, Deepak was named Man of the Match.

Following this 3-0 sweep of West Indies, India play three ODIs and then two Tests on tour. 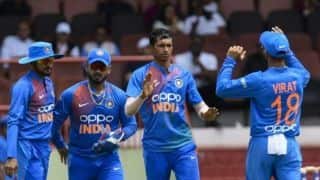 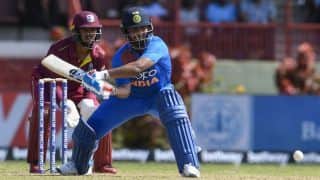