Shami was one of the architects of India's maiden Test series triumph in Australia earlier this year alongside Jasprit Bumrah.

Having shed around 8 kgs, Shami has been able to bowl with pace consistently. He has also been able to stay injury-free over the last 12 months, helping him become a much improved bowler and Virat Kohli‘s go to man in the five-day format. (ALSO READ: Players focus on game, not workload management)

Harris, one of the stars of Australia’s 5-0 rout of England in the 2013-14 Ashes at home before a chronic knee injury cut short his career, could not be happier at Shami’s success over the last 18 months including in Australia.

“I don’t have to work much on him, he does it himself. He has been outstanding around the group, talking about plans, talking to me. Most guys want to pick his brains. If not the best, he is one of the best bowlers in the world at the moment,” Harris, who also works with junior Australian teams, said on Monday. (ALSO READ: Murugan Ashwin, KL Rahul star as Punjab beat Mumbai by eight wickets)

How Shami got his mojo back is a case Harris can very much relate to. “The first couple of days I met him (at KXIP camp), he told me how he improved his fitness and dropped 7-8kgs. How he did some training in hot conditions in Chennai, making him lose weight rapidly.

“Knowing myself as well who went through a stage where I was a little heavy, it makes a big difference when you are not carrying that extra bit of weight. You can go longer (in your spells) and it is easier on your joints. He is bowling with good pace and good consistency and it is good to see that.”

Shami was one of the architects of India’s maiden Test series triumph in Australia earlier this year alongside Jasprit Bumrah, who has successfully defied convention with an unusual action which many thought could hamper his career.

“They (Shami and Bumrah) work well together. You have got Bumrah, who is a bit different and got pace and attacks where as Shami can just come in and ball stump to stump and does a fantastic job. It is pretty well rounded Indian attack, you have to say.”

Talking more about Bumrah, Harris said: “He is very unique. If you listen to a lot of talk over the Australian summer, a lot of fast bowling commentators were saying that if he could just pull his arm front arm in, he will bowl quicker, I disagree with that.

“His action is unique, he bowls the way he does because of that action and he bowls with pace, you know he is just different. It is a difficult for a batter to face him, he is a bit like Malinga. That is his strength, he is not like anyone else.” (ALSO READ: ‘We will rest Shami and Rahul if they feel jaded during the IPL’)

He closely tracked Indian bowlers’ performance in Australia and was left hugely impressed.

“We have got a really good attack back in Australia, but we were out bowled by India (in the series last summer). They way India bowled, we bowled that way in the 2013-14 Ashes. We did not give England an inch.

“But we could not do the same against India, we were not able to put sustained pressure and Pujara batted beautifully as well,” said Harris, who represented Australia in 27 Tests, taking 113 wickets at 23.52.

As someone who is part of the KXIP support staff, Harris also had plenty to say on Ravichandran Ashwin‘s ‘Mankading’ of Jos Buttler, the most talked about incident of the IPL so far.

“There has been a little bit of talk about that. It is up to the captain and the bowler if he wants to do it and he (Ashwin) decided to do that. At the end of the day, the batter should stay in his crease. That is the only way it is not going to happen.” (ALSO READ: Not thinking too much about the World Cup spot: KL Rahul)

Would he have run Buttler out in the same way? “Probably not. Being a quick bowler, you don’t think of those things. It is much easier for a spinner with the approach being a lot slower. I have actually stopped a non-striker in the past, though I have not attempted a run out or Mankad.

“There are some batters who sneak off for those extra two-three metres, that is against the rule. You warn them once and if they keep doing it, then you are in your right tight to do it (Mankad),” added Harris. 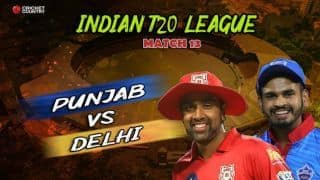