Rahul is in the race to fill the No.4 slot in the national set-up for the showpiece event in England, starting May 30.

New Delhi: When it comes to talent, not many can question what India batsman KL Rahul brings to the table. But a couple of failures at the start of this edition of the Indian Premier League (IPL 2019) saw critics questioning his form as also if this would ultimately see him miss the bus for the ICC World Cup 2019.

After all, the Kings XI Punjab (KXIP) batsman is in the race to fill the No.4 slot in the national set-up for the showpiece event in England, starting May 30.

Not one to let critics get the better of him, Rahul silenced one and all with a match-winning knock against Mumbai Indians (MI) in Mohali on Saturday. His unbeaten innings of 71 not only saw KXIP win the game, but once again showed that this youngster is just too good to miss out for long. (WATCH: Can Delhi beat R Ashwin’s Punjab in Mohali?)

Rahul said that a couple of games don’t really mean much in a long tournament like the IPL and it was all about getting that one innings to turn things around. More importantly, he said that he isn’t willing to let the No.4 slot in the World Cup squad distract him.

“As players it is important that we try and perform well for our respective IPL franchises and team. It is also very important to stay in the present. If you do well, you are automatically in the race for selection. But if you worry about the selection, then you put too much pressure on yourself. I am not somebody who is thinking too much about the World Cup spot. I just want to perform for KXIP and enjoy the IPL. T20 cricket is all about having fun,” he said.

When it comes to the pressure of expectation and the criticism after a couple of failures, Rahul said he doesn’t let what people are saying outside get to him and he tries to keep working hard. (ALSO READ: Murugan Ashwin s double, KL Rahul s return to form and an almost another umpiring controversy)

“I don’t know anything about too much pressure or anything. It was only two games, so the talks don’t get to me and I don’t read them. Yes, it is always disappointing not to score and get off to a good start. But then, it is a long tournament and it is all about working hard and one good knock helps you to get back to scoring,” he said.

There have been talks that Rahul has tried to play one shot too many in recent times and that led to his failure. But the opener defends his decision and says that playing aggressively is important in a format like T20 cricket.

“It is T20 cricket, you have to try and play a few shots. You have to attack and make best use of the first six overs and as a result you might end up playing a few bad shots and these things are bound to happen. You cannot really worry too much about it and you learn from your mistakes. You have to play aggressively as it is T20 cricket and you can’t play in any other way. Have to keep your chin up and look forward,” he said. (ALSO READ: Ashwin did nothing wrong, he was operating within the laws: AB de Villiers)

Asked about donning the wicket-keeping gloves, Rahul said: “Mostly for the team composition. It is a team game and especially when you don’t bowl, you can add value by keeping wickets. I have done that last year as also for RCB. This is something I enjoy doing in T20 cricket and I am all for the team.”

Skipper R Ashwin‘s decision to ‘Mankad’ Jos Buttler made headlines all over, but Rahul says that this unit doesn’t believe in reading about what is being said from the outside.

“We don’t really read too much about what is happening around. We are a new team and look to enjoy ourselves and get to know each other. We have a very positive environment in the dressing room and we are looking to learn and improve as we play more games,” he said. (ALSO READ: ‘Not in spirit of cricket’: MCC backtrack on R Ashwin’s Mankad judgement)

While he is definitely a match-winner himself, one man who has once again shown that class is permanent is Chris Gayle. At 39 years and 192 days, he is definitely one of the oldest players in the tournament. But for Rahul and the rest of the KXIP boys, Gayle is a youngster.

“You have to give it to him. He is one of the most destructive players to have played the game. He brings in a lot more than just his destructive batting to the team. He brings in fun and laughter along with the experience and keeps the mood in the dressing room really light. To have someone with so much experience and yet to have him gel with the youngsters is just brilliant.

Nobody thinks of him as a 40-year-old, he is a youngster at heart and he calls himself that. He is someone who reinvents his batting and has been enjoying himself and it is great to have someone like him around,” he explained. 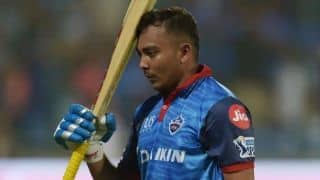