Hello and welcome to Cricketcountry’s coverage of the IPL 2015 Auction for Kolkata Knight Riders. Catch all the live updates for the team’s action in the auction.

Defending champions Kolkata Knight Riders (KKR) have a well-balanced side. They could be on the look-out for an Indian all-rounder; perhaps someone like local boy Laxmi Ratan Shukla or Jalaj Saxena. IPL 2015 Player Auction Live Updates

The reigning champions had a session in the auctions, but certainly not an interesting one. However, there was one highlight during their phase when they purchased an uncapped mystery spinner, KC Cariappa for a hefty amount of Rs. 2.40 crore. Their other big purchases were James Neesham of New Zealand and Brad Hogg of Australia for Rs. 50 lakhs, each.

Following are the players bought by Kolkata Knight Riders (KKR) in IPL 2015 Auction: 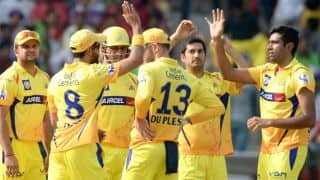