Put into bat, the home side restricted SRH to a modest 150/4 with Mujeeb picking up the important wicket of Jonny Bairstow.

Kings XI Punjab (KXIP) registered a nail-biting six-wicket win over Sunrisers Hyderabad (SRH) in the Indian Premier League (IPL 2019) to pocket their fourth win, their third at home on Monday.

Put into bat, the home side restricted SRH to a modest 150/4. KXIP skipper Ravichandran Ashwin said the plan was bowl tight lines to the opening duo of David Warner and Jonny Bairstow. With the dew persistent and Bairstow’s issues against spin, Ashwin felt the best idea was to throw the ball to Afghan spinner Mujeeb Ur Rahman. (ALSO READ: Mohali dew factor hampered Sunrisers, aided KXIP: Sandeep Sharma)

“It was always in our plans because Mujeeb knows Mohali really well. Sometimes, Mohali, as a spinner, (it feels) lopsided. Because you don’t get enough out of the pitch, there’s a lot of dew, the outfield’s brilliant, the pitch is great (to bat on)… So as a spinner you need to know what sort of lengths and what sort of speeds you should be bowling at,” Ashwin said after the match.

“It’s very important with the dew that you do use the spinner with the new ball, and someone like Mujeeb has done it all through is career, he’s just bowled with the new ball for Afghanistan all his life. He’s very comfortable bowling with the new ball, so I thought, especially because of Jonny Bairstow up there, if he can get the ball to come in or bowl the googly it was a good match-up.” (ALSO READ: Kings XI Punjab jump to third spot after thrilling win at Mohali, Sunrisers Hyderabad slip to No. 4)

Meanwhile, chasing 151, Kings XI Punjab would have liked to finish things off earlier, specially after KL Rahul and Mayank Agarwal’s century-run partnership for the second wicket. Rahul said Agarwal’s approach helped him settle in. “Mayank and I (both play for Karnataka in domestic cricket) have grown up playing together, so we have that understanding and we enjoy playing with each other.

“The way Mayank came out… throughout the six games he’s come out with a very positive attitude, even against Mumbai he did the same thing. So, it gives me a little bit of time.”

Elaborating further on their plan, he said: “It was simple, he had to look for the boundaries. But I did tell him that maybe hitting sixes was a bit difficult because the ball kept skidding through and you couldn’t get elevation,” Rahul said. (ALSO READ: There is scope for improvement: Ashwin)

“So, I said look to hit the pockets, maybe get fours because we’re not too far behind, we don’t need 16 or 17 runs, we just need 11. He came out, still tried to hit a six, luckily for us went in the gap, scored a few twos and (I) could strike that boundary at the end.”

The one drawback for KXIP was Agarwal, who picked up a slight niggle. “Need to bring this up, he hurt his finger and I don’t know the extent of the injury but he came out and his top hand wasn’t, you know… he was in pain, so to play an innings like that was incredible,” Rahul said. 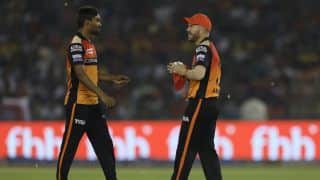