Pietersen said that the horror was intensified by the shock death of former Surrey batsman Tom Maynard in 2012.

Henriques and Burns were knocked unconscious as they collided while going for a chance in a Twenty20 match away to Sussex at Arundel on England’s south coast. All-rounder Henriques broke his jaw in three places after he was struck by Burns’s knee. Burns sustained head and facial injuries. Both players needed oxygen treatment and three ambulances were called on to the outfield before the pair, who regained consciousness before leaving the ground, were taken to St Richard’s Hospital in nearby Chichester for further assessment. READ: Moises Henriques’ jaw broken following on-field collision with Surrey teammate Rory Burns

Pietersen said on Monday that the horror at the scene unfolding before the players’ eyes was intensified by the shock death of former Surrey batsman Tom Maynard, killed by a London Underground train in 2012. “I was stood at cow corner and you could see it happening before they collided,” Pietersen told the Daily Telegraph, for whom he is a columnist. READ: Moises Henriques, Rory Burns involved in on-field collision during Sussex-Surrey T20 tie

“I kept thinking one of the guys will call. Then you think one will stop but then bang, bang. It was absolutely sickening,” the exiled England batsman added. “When those guys went down and did not move it hit some of our guys very hard. There was some raw emotion clearly visible which you can understand when the team has gone through the death of a team-mate. When the chairman came in the dressing room and said they are going to be ok it lifted the mood but they were still very upset.” READ: Craig Kieswetter announces retirement following eye injury

Henriques and Burns were treated on the field for 40 minutes before the umpires abandoned the match after they were taken to hospital, with Sussex 141 for seven in the 19th over. READ: Cricketer succumbs to blow on chest in Karachi

“It was the right decision,” said Pietersen. “We had lost two of our players, a lot of players were crying in the dressing room and it is only a game of cricket. There is more to life than cricket and the correct decision was made.” READ: Head and face injuries in cricket — Part 1 of 3

Sussex batsman Stefan Piolet inadvertently sparked the collision when he launched the ball high into the offside off a top edge. Henriques, running back from backward point, and Burns, running in from the boundary, didn’t see each other as they went for the ball. Surrey director of cricket Alec Stewart, who witnessed the incident, said Burns was close to being discharged but that Henriques would require further observation.

“Rory is in decent shape considering what happened,” said the former Surrey and England wicket-keeper. “He hopes to go home soon and Henriques tomorrow (Tuesday) but he will have to come back for dental surgery. He is on painkillers and is a bit groggy.” Burns, meanwhile, tweeted his gratitude for the care he had received, saying: “To all the medical staff that helped me yesterday and today would like to say a big thank you! And to everyone for the messages!” READ: Head and face injuries in cricket — Part 2 of 3

He also posted a picture of himself and Henriques holding hands while lying next to one another on stretchers, adding: “And to @Mozzie21 (Henriques) keep progressing well kezza!”

While on-field collisions between two fielders going for the same catch are not unknown, they rarely lead to such severe injuries. One of the worst incidents involved Australia’s Steve Waugh and Jason Gillespie, who ran into each other while fielding in a Test match against Sri Lanka in Kandy in 1999.

Waugh, then Australia’s captain, broke his nose while fast bowler Gillespie, now the coach of English county champions Yorkshire, fractured his shin in an accident that sidelined him for nearly a year. Surrey were back in action on Monday, against Glamorgan at Guildford, south of London, in the Second Division of the County Championship. Henriques, 28, has represented Australia 13 times across all three international formats, most recently in a one-dayer against England at Hobart in January. READ: Head and face injuries in cricket — Part 3 of 3 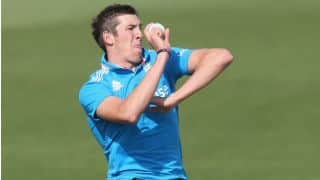 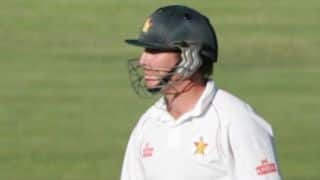