Despite Virat Kohli and Yogesh Takawale, the wicketkeeper playing with a cool, calm and collected approach, Royal Challengers Bangalore lost their game to Kolkata Knight Riders in Indian Premier League (IPL) 2014 by 30 runs. Kohli was finally dismissed with Morne Morkel taking a fine catch at short third-man. It was Sunil Narine with his box of tricks who dismissed him. Narine also snared the wicket of Takawale. He was cleaned up with Takawale getting an inside edge onto his stumps.

Even Yuvraj Singh and AB de Villiers couldn’t really get going. Yuvraj then, played a few fine shots off Umesh Yadav’s bowling, but it was too late. He too lost the plot to Narine’s bowling, as he got out to the one that goes the other way. Narine was certainly a thorn in their flesh. No one could decipher his bowling on a track that was gripping a bit. He now is the joint wicket-taker in IPL 7 with 20 wickets to his name as of now. With this victory, Kolkata have qualified for the playoffs. A fine achievement considering the fact that they had a bad start to IPL 7 and their captain Gautam Gambhir was in bad form.  It is their sixth victory in a row in IPL 7.

Actually while batting, Kolkata lost early wickets, while playing in a key a game against Bangalore in IPL 2014, but Robin Uthappa and Shakib Al Hasan helped them to recover and reach 195 for the loss of four wickets on the board. Gautam Gambhir, Manish Pandey and Yusuf Pathan were out during the early part of their innings. Yusuf did play a few eye-catching shots, but then got run out.

Shakib was particularly severe on Yuzvendra Chahal, the leg-spinner’s bowling. He lofted him down the ground and also hoicked across the line. He smashed Yusuf for 24 runs in a single over.  For Bangalore, all the bowlers were a trifle inconsistent. He finally lost his wicket to Abu Nechim’s seam bowling. Mitchell Starc was perhaps the best of a very average bunch of bowlers. Ashok Dinda did take a wicket, but was again erratic. Even Chahal, who has been one of their key bowlers of IPL 7 too was hit around.

It was actually Bangalore captain, Virat Kohli who won the toss and elected to field in the game against Kolkata in IPL 014. It was Uthappa, who has been in great form opened the batting with Gambhir, the skipper of Kolkata. Mitchell Starc, the left arm swing bowler opened the bowling for Bangalore. He found a wee bit of swing in the first over he bowled.

Gambhir started on a bang by neatly playing a flick shot around the corner for a boundary. Gambhir then lost the plot by trying to repeat the shot, but was caught down the leg side by the wicketkeeper of Bangalore setup, Yogesh Takawale. A fine start by Bangalore, who are desperate to win the game to stay alive in the competition. The error prone, Ashok Dinda bowled the second over of the game for IPL 2014.

Manish then played a square drive off Dinda’s bowling. It was another of those juicy half volleys bowled by Dinda. A fine start by Pandey. Bangalore bowlers need to keep taking wickets to keep the opposition on a tight leash.  The deck is good for batting and Kolkata will look for put the runs on the board.

Man of the match: Robin Uthappa 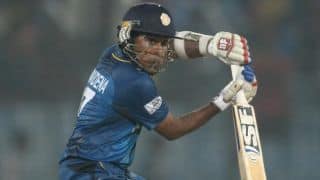