Simmons scored a match-winning 68 on Monday night against Sunrisers Hyderabad.

After being left ignored for a couple of years, despite providing a good show in a Twenty20 (T20) tournament in West Indies, Lendl Simmons was finally picked up by Mumbai Indians (MI), when he was asked to fill the void created by an injured Jalaj Saxena.

Taking advantage of the opportunity, Simmons, scored an all-important 68 to guide his team to victory against Sunrisers Hyderabad on Monday night.

Speaking to the official website of the Indian Premier League (IPL), Simmons said that while playing for Trinidad and Tobago in the Champions League T20 2009, he wanted to play for Mumbai Indians.

He added, “I am loving the colour blue and it is great to play for the Mumbai Indians. They are a good franchise and I have been watching them since Champions League T20 when I was playing for Trinidad & Tobago. I have been watching the IPL all these years and it is good to be a part of it. All the guys are very good and very talkative and always supportive. It is good to be with them.”

Simmons scored 38 in his first IPL match and on Monday night, playing his second match, he scored a match-winning half-century.

“It was very satisfying to come up with a win. Even in the first game, I got off to a good start with a good strike-rate, but tonight, it was a better pitch to bat on. And I am glad I made use of the conditions and came up with a good score.”

The 29-year-old said, “I have batted in a number of positions for the West Indies, and at the moment, I am batting at No.3 for my national side. Having said that, I enjoy opening the batting and take it is as a nice challenge. I have opened with CM Gautam in the two games I have played so far and it is good to have a classy batsman on the other side.”

“The Mumbai Indians were always clear of my role and responsibilities and they knew that I was an opening batsman. I am open to batting at any other position that the team wants me to, but it feels nice to bat at the top of the innings.”

On being asked about whether he felt odd after not being picked up during the IPL auction, Simmons said, “I was not surprised when I was not picked in the auction, but I did feel I had a good chance this year as I had a good domestic season back home. Now that I have got a chance, I will make the opportunity count.”

Fellow West Indian Dwayne Smith used to open the batting for Mumbai till a season earlier. Simmons said, Smith asked the former to play his best and enjoy the opportunity.

“I did not have a chat with him, but back home, I have played with Dwayne Smith a lot. He just told me to do my best when I became a part of the IPL and asked me to relish the opportunity.”

Even though the Trinidad and Tobago cricketer prefers to play conventional shots, he said that eventually the batsman has to flow with the game and play big shots, if needed.

“It depends on the bowlers and the situation. The first couple of overs, I try my best to bat in a conventional way, playing the correct shots. But eventually, you got to get on with the game and go for the big shots. I do try to be a bit innovative at times and when it comes off, it looks good and when it doesn’t, it is not so impressive.”

“I am the aggressor and I like to take the attack to the bowlers. That is how I see my role, and tonight, it did not come off as I wanted it to. In the games to come, I will try and make sure I attack right from the beginning.”

“As a team, we would want to win all the games and qualify for the Playoffs. I want to do my part for the team by giving a good start and scoring with a good strike-rate. I want to score a half-century every game and get my team off to a flier at the top of the innings,” Simmons concluded. 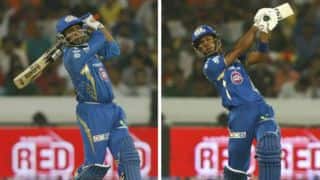