Ngidi was ruled out of this season after sustaining a side strain injury during South Africa s ODI series win against Sri Lanka.

Former Australia batsman Brad Hodge feels Lungi Ngidi s absence from the Chennai side in this Indian T20 league will be a huge loss for the MS Dhoni-led side. The South Africa pacer, who had the second-best economy rate for CSK (with six runs per over) last edition, was ruled out of this season after sustaining a side strain injury during South Africa s ODI series win against Sri Lanka. (ALSO READ: IPL 2019 injury tracker: Who’s out, who’s in doubt)

Lungi Ngidi is a huge loss to Chennai. His impact was fantastic last season. When you see him up close and personal, he s actually a big strong guy and poses a big threat to a batter running in. I thought he was particularly impressive with the new ball, Hodge was quoted as saying by ESPNCricinfo on Friday. (WATCH: Kohli’s Bangalore vs Dhoni’s Chennai in T20 league opener)

Defending champions Chennai kick-start their season in the tournament opener as they lock horns with Virat Kohli s Bangalore outfit at the MA Chidambaram Stadium on Saturday. Credit to the great cornerstone of that CSK side to be able to use their spinners in the middle, but Ngidi made an impact and he s sadly lost, Hodge said.

The former coach of the Punjab-based franchise, Hodge is impressed with Chennai s squad this season. The three-time champions have managed to retain most of their players and look strong contenders to make it two titles in a row.

It s a strong side, good strong top order, good depth in the middle. With Kedar Jadhav back in the side, really opens up that spin department as well, so they got variety and that suits that stadium very well, he said. (ALSO READ: Keeping the core group has been CSK’s strength: Dwayne Bravo)

The 44-year-old Australian picked Ambati Rayudu, who has not been in the best of forms recently, to open the innings alongside Shane Watson. Rayudu is primed for a very good IPL. After what just happened in the ODI series (against Australia), he will be itching to get out there and show his skills and show the selectors what he s about leading up to the World Cup selection, the 44-year-old explained.

Chennai has one of the best fan engagement activities among all the teams in the cash-rich league. Recently, a video was doing the rounds of captain Dhoni walking to the field at the Chepauk for a training session in front of a near full house and Hodge was might impressed.

To see those videos of MSD walking out to bat not even on game day was just incredible. That s the impact he has, he s a phenomenal stature in cricket, he said. 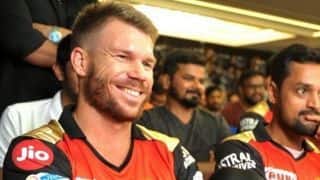 Only BCCI has to answer why I didn’t play the Indian T20 league last year: Steve Smith