READ: Abdul Qadir – An emotional man who was loved by all

A 16-year-old Tendulkar’s battle with legspinner Qadir is the stuff of legend as he took on the Pakistan bowler during an exhibition match.

“Remember playing against Abdul Qadir, one of the best spinners of his times. My heartfelt condolences to his family. RIP,” Tendulkar posted on his Twitter handle.

Australia spin legend Shane Warne said he looked up to Qadir and met him while on his first tour of Pakistan in 1994. “It’s very sad news about Abdul Qadir. I had the opportunity to meet him in 1994 during my first tour of Pakistan and a lot of people who bowled leg-spin like I did, we looked up to him,” he said while commentating during the ongoing fourth Ashes Test between England and Australia at Old Trafford. “He was a terrific bowler who bamboozled a lot of batsmen,” said Warne.

Veteran Harbhajan Singh recalled meeting Qadir, who would have turned 65 this September 15.

“Shocked to hear Abdul Qadir passed away. Met him two years back he was full of energy as always … A champion bowler, great human being, you will be missed forever … condolences to the family #RIPabdulqadir,” Harbhajan tweeted.

India offspinner Ravichandran Ashwin expressed his sadness, calling him a ‘stalwart from Pakistan.’

“Extremely saddened by the demise of Abdul Qadir the spin bowling stalwart from Pakistan. My heart goes out to his family and friends. #RIP,” Ashwin tweeted.

Qadir played 67 Tests and 104 ODIs during an international career during which he collected 368 wickets.

Another former India international Madan Lal mourned his death, saying he’ll miss a ‘dear friend.’ “Shocking news legendary leg spinner Abdul Qadir passing away. He was a dear friend will miss him. I would like to extend my heartfelt condolences to his family.May his soul Rest in peace,” he wrote in his handle.

Cricketer turned commentator Aakash Chopra credited Qadir for making legspin fashionable. “Abdul Qadir The man who made leg-spin fashionable. Long curly hair…bounce in every step of a fairly long run-up. Rest In Peace. Condolences to the family and loved ones,” he tweeted. 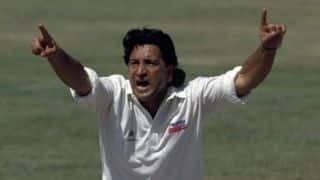