With the win – the second of the season – and six points, Services have jumped to the fourth spot with 16 points, while Assam are at the sixth position with 14 points.

Services thrashed a listless Assam by 10 wickets on the final day of their Round 6 Elite C match of the Ranji Trophy 2018-19 season at the Airforce Complex Ground in Palam, New Delhi on Monday.

With the win – the second of the season – and six points, Services have jumped to the fourth spot with 16 points, while Assam are at the sixth position with 14 points.

Resuming their second dig at 83/3, trailing by 102 runs, Assam added 10 more before they lost their first wicket of the day in Sibsankar Roy, who was dismissed by fast bowler Diwesh Pathania.

Gokul Sharma and Sarupam Purkayastha then steadied the innings with a 78-run partnership as the duo notched fifties before left-arm spinner Arun Bamal broke the stand after cleaning up Sharma, who departed for 106-ball 56, that included eight boundaries.

Assam captain Amit Sinha didn’t last long and was trapped lbw off Khalid Ahmed. Purkayastha then perished to NK Singh lbw and walked back to the pavilion after scoring 74 off 144, his innings laced with eight boundaries.

Wickets kept falling in a heap for Assam as Pathania returned to claim the next two wickets of Kunal Saikia (18) and Mukhtar Hussain (1) to complete a five-wicket haul. Bamal then wrapped up the innings with the wicket of Ranjeet Mali (18) as Assam were folded for 256 to give Services 71 runs for victory.

Pathania, who snapped three wickets in the first dig, returned with exceptional figures of 5/56 in his 20 overs at 2.80.

In reply, Services chased down the target with aplomb. Opener NK Singh and Nakul Sharma needed just 18.1 overs to chase the target as Services walked away with seven points, including the bonus point for the huge margin. 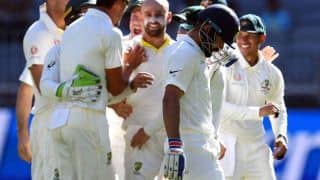 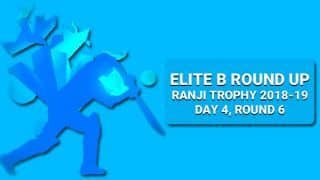