Steyn bowled a ten-over spell after lunch in an effort to blow away Sri Lanka's tail.

Durban: Dale Steyn bowled his way past another milestone and enabled South Africa to gain an advantage over Sri Lanka on the second day of the first Test at Kingsmead on Thursday and admitted he felt he had “started over” following a two-year struggle against injuries. (ALSO READ: Dale Steyn grabs four, advantage South Africa)

It took Steyn’s career total to 437 Test wickets, moving him past India’s Kapil Dev (434) and drawing level with Stuart Broad of England in joint seventh place on the all-time list. “It’s just a blessing to be able to be playing again,” he said. (ALSO READ: Dale Steyn surpasses Kapil Dev in Test wickets)

“I almost feel like I’ve had to start over. I don’t feel I’m on 430-odd wickets, I’m on probably twenty. It’s nice to finish a Test series against Pakistan and not have someone saying he’s an injury away from retiring and it’s nice to contribute again. Hopefully it can continue a bit longer.”

Steyn bowled a ten-over spell after lunch in an effort to blow away Sri Lanka’s tail, which he said he believed was only the third time in a 92-Test career he had bowled so many overs in succession. “When I’m bowling ten-over spells it shows I’m enjoying what I do,” he said.

South Africa’s decision to pick five specialist bowlers meant that their advantage was some way short of being decisive, with Faf du Plessis (25 not out) and Quinton de Kock (15 not out) their last two recognised batsmen going into day three.

Sri Lanka were bowled out for 191 and were unable to build on a good first day when their inexperienced bowlers surprised the South African batsmen, who could manage only 235 in their first innings.

Steyn and Vernon Philander soon put their stamp on the game when Sri Lanka resumed at 49 for one on Thursday, taking three wickets in the first ten overs of the morning.

Kusal Perera played some bold and occasionally lucky strokes in making 51 off 63 balls for Sri Lanka and the hosts were frustrated when a barrage of short-pitched bowling could not break a stubborn ninth wicket partnership of 32, the joint second-highest of the innings, between debutant Lasith Embuldeniya and Kasun Rajitha.

It was particularly frustrating for Steyn. He had already taken four wickets when Rajitha, on ten, gloved what looked a simple chance to Dean Elgar in the gully, only for the fielder to put it down.

The stand was eventually ended by a smart run-out of Rajitha by Aiden Markram at short leg.

Steyn paid tribute to Embuldeniya, 22, who battled to 24 off 63 balls. “He took a couple on the head, but he never backed away or had a slog. He gutsed it out.”

Perera said he felt Sri Lanka were still in the game but added: “We have to get them out quickly.”

The left-handed Perera played some audacious strokes, including a scooped six off Kagiso Rabada.

Asked about his attacking approach, he said: “It’s my only game plan. Their bowlers are in the top ranks in the world and if they re attacking I’m trying to counter-attack.”

Perera said that although the pitch was slow, there was seam movement to help the bowlers.

With bright sunshine following the morning’s overcast conditions, the stage seemed set for South Africa to move into a commanding position, but their top-order batting again proved fragile.

Embuldeniya followed up his courageous batting by dismissing Temba Bavuma and Elgar with his left-arm spin bowling. 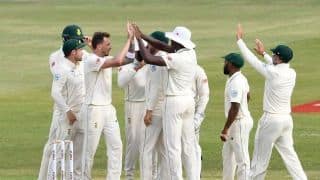 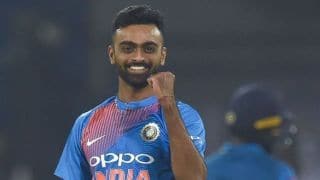