Batting first, Punjab were off to a flier with openers Shubman Gill and Manan Vohra putting on 57 runs.

Punjab recorded their second win after a thumping 79-run victory over Goa in a Group C Round 6 match of the Syed Mushtaq Ali 2019 trophy on Thursday.

Batting first, Punjab were off to a flier with openers Shubman Gill and Manan Vohra putting on 57 before the young Gill fell to Felix Alemao in the seventh over for 21 off 16. Captain Gurkeerat Singh Mann added 23 and was dismissed by Krishna Das. (ALSO READ: Rahul Tripathi powers Maharashtra to 7-wicket win against Baroda)

While wickets kept falling at the other end, Vohra ensured the run-rate doesn t dip. He blazed away to 87 in just 48 deliveries with the help of seven sixes and six boundaries. Vohra s impressive knock was brought to an end by Malliksab Sirur in the 16th over.

Towards the end of the innings, Prabhsimran Singh and Manpreet Gony unleased some lusty blows to take Punjab across the 200-run mark. Prabhsimran smashed four boundaries in his 10-ball 20, while Gony slammed a boundary and followed it up with a six in his 14 off 5. For Goa, Sirur and Alemao pocketed two wickets each.

Krishan was the pick of the bowlers for Punjab, returning with impressive figures of 4/26 in his four overs. Karan Kaila snapped three for 20 in his three overs. 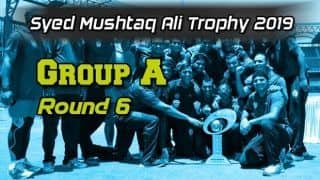