Having earned praise from former cricketer and renowned commentator Ian Chappell, Virat Kohli has earned another admirer in form of Ian s younger brother, Greg Chappell. The former India coach, who was near Bangalore attending a friend s textile workshop, admired Kohli s batting along with his leadership skills, and offered the Indian captain a remarkable compliment.

“Kohli is proving to be the outstanding batsman of his era,” Chappell said, as per Mumbai Mirror. Kohli s aggressive captaincy deserves acknowledging. “His partnership Rahane in the first innings was the decisive period of play during the Trent Bridge Test match.”

Chappell isn’t the first former cricketer to call Kohli the best batsman of this generation. The feeling was mutual from another former Australian captain Steve Waugh, while ex-Sri Lankan cricketer Kumar Sangakkara feels Kohli has the elements to become India’s best batsman of all time.

Kohli s match-saving partnership of 159 runs with Ajinkya Rahane is what drove the advantage towards India during the third Test against England at Trent Bridge. From 60/0, India were reduced to 82/3 before the Indian captain and vice-captain played out a wicket-less session and gave the side a chance to make its first real statement in the series. He was named Player of the Match for his tally of 200 runs in the Test – taking his series tally to 440 runs – and jumped to the No. 1 spot in the ICC Test rankings for batsmen.

What Kohli and Rahane began, was completed well by the Indian fast bowlers. In the first innings, Hardik Pandya s 5/28 turned the game on its head, whereas Jasprit Bumrah, returning from a thumb injury, made his presence felt in the second with his maiden five-wicket haul. England, who were chasing a daunting target of 521 were all out for 317, and India were awarded the match by 203 runs.

Chappell had a tumultuous time during his two-year long stint with the Indian cricket team. His fallout with Sourav Ganguly in 2005 went on to become one of the biggest controversies of Indian cricket. Under Chappell, India also failed to go past the group stage of the 2007 World Cup and crashed out after just one win from three matches.

Ahead of the Trent Bridge Test, Chappell sr. had said that getting India back in the series after losses in the first two Tests would be the first real tough test to determine how effective a leader Kohli can be. He also referred to the Australia tour starring November as one of the sterner challenges Kohli will face, reckoning that beating Australia on their soil is remains a tough task and provided India lose to England and follow it with a series defeat against Australia, it would be considered a “bookable offence.”

Kohli has excelled as a captain in home conditions registering series wins over South Africa, New Zealand, England and Australia since taking over in 2015, but whether he has the teeth to succeed overseas will determine Kohli s credentials as a leader.

“Prior to reaching the UK, India had a glorious opportunity to defeat two heavyweights in England and Australia in consecutive away Test series. Had they done so, it would have been a laudable achievement, Chappell had said. Now Kohli s team are in danger of not only wilting tamely against England but also of providing a depleted Australian team with a confidence boost, to the point where they will feel their chances of victory at home have greatly improved. If India were to lose both series, it would be a bookable offence.” 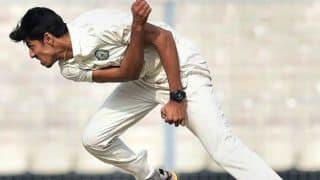