Roy was called up to England’s Test squad for the four-day match against Ireland at Lord’s last week, having scored 443 runs at an average of 63.28 and strike-rate of 115.36 during the team’s historic World Cup run. He made 5 and 72 in England’s win over Ireland, and has been included in the home team’s squad for the Ashes.

However, Hazlewood viewed Roy’s selection for the five-day format with some skepticism as he gave the example of Australia’s limited-overs captain Aaron Finch struggling to replicate his ODI and T20I success in Tests. Finch was given a Test debut in October 2018 and began with a half-century in his first innings but struggled thereafter. During the India series at home, he managed 97 runs across six innings and was dropped for the fourth and final Test. Finch has not been recalled since and during the World Cup spoke candidly about his chances of earning another shot in Tests as unlikely.

In Hazlewood’s estimation, Roy could struggle to convert his ODI success at Test level in the Ashes.

“We’ll see how Roy goes in Test cricket. He’s has only played one Test match and it’s a lot different opening the batting in a Test than a one-day game, that’s for sure,” said the fast bowler ahead of the first Ashes Test. “In England, opening is probably the toughest place to bat which probably made Alastair Cook’s record all the better. To play attacking cricket in those conditions is tough.

“Aaron Finch found it tough last summer against a quality India attack on wickets that didn’t do too much to be honest. I think he found it a big step up to be honest. He found the ball swung and seamed around and the wickets were a lot different to a one-day wicket. He’d played a lot of his four-day cricket at five or six and I think Roy is the same at Surrey. It’s hard to bat five at a level below and then open in Test cricket. We’ll see.”

England coach Trevor Bayliss said after the win over Ireland at Lord’s last week that Roy should back his natural ways, but also be selective in his shot selection. The Test debutant was out edging to first slip in England’s first innings and then was bowled for 72 off 78 balls when trying to drive expansively into the offside.

Roy went into his maiden Test with a first-class average of 38.38 from 132 innings, with nine centuries and 22 half-centuries. He has mostly batted in the middle order in first-class matches for Surrey, but thrice during the 2018-19 season he went in at No 3, scoring 63 against Somerset, 5 and 128 versus Essex and 59 and 14 for England Lions versus Pakistan A in Abu Dhabi.

England’s top order struggles continued from the West Indies tour earlier this year when they met Ireland at Lord’s, as scorelines of 36/3 and 26/1 indicate. The hosts were bowled out for 85 on the first morning and then in the second lost Rory Burns for 6 before the nightwatchman Jack Leach and Roy put on a match-winning 145 for the second wicket.

Hazlewood was hopeful of Australia’s bowlers putting the squeeze on England come the Edgbaston Test on August 1.

“Their top order is under a little bit of pressure probably, with just the fact they haven’t played that much Test cricket,” he said. The more we can put them under pressure early and get stuck into that middle order when the ball is nice and hard and new, that’s great.”

“If you can really build the pressure on one guy and get him early in the first Test especially, you can sort of create that doubt in that mind and get the upper hand and just keep driving that in as the series goes on. This is the only team we play in a five-Test series so it’s a little bit different than others, but definitely that’s key.” 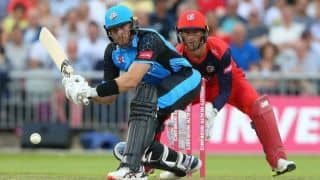