Bumrah surpassed Dileep Doshi s 39-year-old record to become the highest wicket-taker in Tests on debut in a calendar year.

Jasprit Bumrah pocketed his maiden six-wicket haul to decimate Australia s batting order as the hosts folded for 151 on day three of the third Test against India at the Melbourne Cricket Ground (MCG) on Friday.

Bumrah, who has been in phenomenal form this year across all formats, surpassed Dilip Doshi s 39-year-old record to become the highest wicket-taker in Tests on debut in a calendar year.

On an MCG pitch that is beginning to show signs of wear and tear, Bumrah, who became the first Asian bowler to register five-wicket hauls in England, South Africa and Australia in a calendar year, used the short ball to good effect and dismissed opener Marcus Harris for 22. He then returned to see the back of Shaun Marsh on the last ball before lunch with a beautiful slower yorker.

Travis Head was then cleaned up a 142kmph ripper, this one swung back in late leaving Head beaten for pace.

Australia captain Tim Paine and Pat Cummins were involved in a reargued effort, but Bumrah returned to break the 36-run partnership after he drew Paine with a good length delivering angling in towards off only for the batsman to edge it behind to Rishabh Pant.

Bumrah then set up Nathan Lyon, who was left flummoxed with a mixture of pace and bounce. He followed his bouncer with a full rocket that trapped Lyon, who departed for a duck. Bumrah wrapped up Australia s innings with the wicket of Josh Hazlewood, who was cleaned up for a duck to complete a fine bowling performance.

Despite securing a 292-run lead, Virat Kohli chose not to enforce the follow-on. India will bat again, having already racked up a first-innings total of 443/7 declared from 169.4 overs, and then bowling out Australia in 66.5. 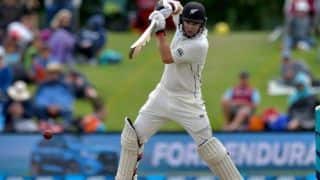 I'll put my hand up and work my a*** off in the nets to make a comeback: Peter Handscomb