Over the next two years, India play two T20 World Cups and the World Test Championship.

Last week, Ravi Shastri got his contract extended for another two years as the head coach of the Indian cricket team. The Kapil Dev-headed Cricket Advisory Committee (CAC) deemed him to be the best contender for the job out of the six candidates who were interviewed.

The former India allrounder will coach the Indian team until November 2021.

In the next two years, India will play two T20 World Cups and the ICC’s World Test Championship and Shastri has his task cut out in his second term as coach.

Here’s a glimpse of the challenges that Shastri faces:

Over the past five ICC trophies, it has been a dry run for India. Critically, they have developed a habit of not being able to finish the job.

And of these five occasions, Shastri was a part of the backroom staff in three knockout matches.

In three semi-finals under Shastri, India have not been able to find a way to clear the stumbling block. Whether it is the knockout contest pressure or some other reason, Shastri will have to get the job done this time around with three ICC championships set to be played in the next two years.

From 2004 to 2014 in Tests and until 2019 in ODIs, there were no doubts as to who the best wicketkeeper in the team was. MS Dhoni just didn’t keep wickets, he also led lndia across formats. During the Dhoni era, India did not require the services of any other wicketkeeper on a regular basis. The likes of Parthiv Patel and Dinesh Karthik continued to vie for a place but a consistent run never came.

In the present scenario, Rishabh Pant has taken over the wicketkeeper’s role across all formats. He has shown early promise in Tests – the only Indian wicketkeeper with centuries in England and Australia – but the same results haven’t been forthcoming in ODIs and T20Is. This is a worrisome situation for India, given that Dhoni is almost done with his international career.

In Tests, the likes of Wriddhiman Saha and KS Bharat will keep Pant on his toes but in white-ball cricket, there is a scarcity of options.

Solve the No 4 conundrum

The talent hunt which started after Yuvraj Singh was ‘rested’ for the tour of Sri Lanka in 2017 is still on. Yuvraj has already retired from the game. Dhoni, Hardik Pandya, KL Rahul and many more have batted at that position but the hunt to find Yuvraj’s successor at No 4 continues.

Shreyas Iyer, who has never batted at that position, could be the answer to the debate. He impressed with twin fifties against West Indies in the recent ODIs, critically taking the pressure off Kohli. The team management has four years to prepare the man to be the pillar of India’s middle order, but will Iyer be given a consistent run or will the selectors again dial in changes?

Come the foreign tours, however, they lost to South Africa 1-2 in Tests before a 1-4 defeat against England followed.

Kohli led the side to a 2-1 victory in Australia but the challenge for the Indian team will be to replicate the success in December 2020 in another four-Test series in that country. Remember, there was no Steve Smith and David Warner when India played Australia in 2018-19.

Out of three overseas Test tours that India play under the ICC’s World Test Championship, series against New Zealand in February-March 2020 and then in Australia as the year closes will be the toughest. Especially in New Zealand, where the conditions are tougher than those in Australia.

Traditionnally, India does not choose a separate T20I squad. Over the years, the players who play ODIs are also a member of T20I squads. For once, India had a T20I different squad than that for the recent ODIs against West Indies.

With two T20 World Cups lined up, it is time for India’s selectors to bring about changes to the squad in the shortest format of the game. Due to the lack of T20Is that India play, there is no consistency but in the upcoming home season, India play plenty of of T20Is. It is a great chance for the team management to ink in T20I specialists for the World Cups ahead. 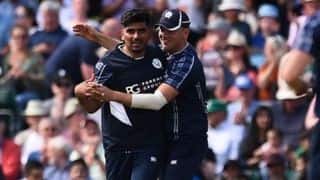