Pujara's unbeaten 132 should have had India well in the clear. But Ali s spell ensured the spoils were shared on another gripping day in this Test series.

It took Cheteshwar Pujara nearly five years to score a century outside the Indian subcontinent, when he rushed through to two runs, and keep strike while batting with a dogged Jasprit Bumrah at the other end. Pujara s 15th Test hundred first took India close to England s first-innings total, and then 27 valuable runs past it as they finished on 273 all out on the second day of the fourth Test in Southampton.

More drama was added to what has already been an absorbing Test series between England and India, as Virat Kohli and Pujara had things seemingly under control with a 92-run third wicket stand, but the Indian captain s dismissal caught at slip off Sam Curran for 46 sparked another unlikely collapse on a sunny afternoon at the Ageas Bowl.

When Moeen Ali was called back to the England side for the fourth Test, it would have hardly been any surprise as to who would cause India the most problems with the ball. After frustrating India with a potentially game-turning partnership with Curran on Day 1, Moeen celebrated his return to the England team with five wickets, nearly polishing off India s lower order in the process.

What looked to be a relatively comfortable position with India on 156/3 at the drinks break in the post-lunch session, Ben Stokes first got on a superb spell that saw him remove Ajinkya Rahane for 11, Moeen s 5/63 from then on broke the back of India s first innings. Rishabh Pant was pinned to his crease for 29 balls before he missed a straight one off Moeen, and a procession shortly after tea ensured India had to dial down their dreams of taking a significant lead.

Which begs the question as to why England didn t include him in the first three Tests against India. The last time India visited England, Moeen had taken 19 wickets against them, and crucial ones at that. This time, save for Pujara and Jasprit Bumrah s defiance, England were looking at an important advantage in the Test match.

India s quest to level the five-Test series must be credited to the bowlers who have risen to the occasion, but besides Kohli and Pujara and Rahane at certain stages none of the batsmen have made telling contributions, which is reflected in where the series stands.

The experience of India s middle order gives way to two inexperienced members of the team, Hardik Pandya and Pant, whose dismissals were eked out through pressure. And as wickets continued to tumble from the other end, India wouldn t have found a better batsman than Pujara in the middle to project a sense of calm in the middle of chaos.

From 195/8, Pujara, first in partnership with Ishant Sharma (32 runs) and then Bumrah (46 runs), took India 27 ahead, which may prove to be vital when the dust settles over this Test match. He first farmed the strike, and as his confidence grew in the tail, he made the most of the spread-out field, nudging quick twos and threes. His unbeaten 132, just shy of six hours spent at the crease, should have had India well in the clear. But Moeen s spell ensured the spoils were shared on another gripping day in this fascinating Test series. 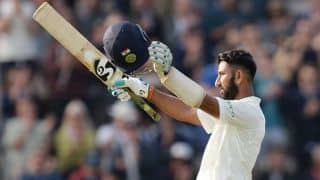 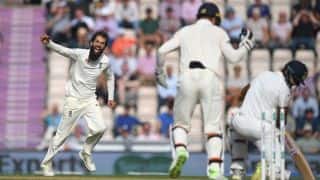