Virat Kohli has become the fifth Indian captain to win a Test match in Australia after Bishan Singh Bedi, Sunil Gavaskar, Sourav Ganguly and Anil Kumble following a 31-run victory over the home team at Adelaide Oval on Monday.

Led by a superlative bowling display from Jasprit Bumrah, Kohli’s team bowled out Australia for 291 on a tense final day to make history, for no visiting Indian side has ever started a tour of Australia with a win.

Here s a showcase of Indian Test victories in Australia:

India won their first Test on Australian soil on December 30, 1977 at the iconic Melbourne Cricket Ground to claw back 1-2 in the best of five series against Bob Simpson s team. Down 0-2, India ended a 12-match winless run in the country and Bedi became the first Indian captain to win a Test there.

Some gutsy batting by Mohinder Amarnath, Gundappa Vishwanath, Ashok Mankad and Dilip Vengsarkar helped India to 256 in their first innings, before BS Chandrasekhar ripped through the Australian line up with six wickets to keep them to 213, giving India a crucial lead of 43.

A century (118) to Gavaskar and useful contributions from Chetan Chauhan, Syed Kirmani, Vishwanath, Mankad and Amarnath helped India to 343, which left the hosts to chase 387. Once again, Chandra smashed the batting with identical figures of 6/52 to take 12 in match as India won by 222 runs.

India gained the ascendency on day one by bowling out Australia for 131 and then being let off by the home team’s catchers. On a damp pitch, Bedi and BS Chandrasekhar took 3/49 and 4/30 to knock over Australia in four hours. Gavaskar and Chetan Chauhan gave India their best start of the series, adding 97 for the opening wicket.

A mini-collapse ensued on day two as India lost the openers and Mohinder Amarnath, but Gundappa Viswanath made the most of two lives on 10 and 27 to score a gritty 79. Assisting hm was Dilip Vengsarkar with 48 as the pair put on 125. An 81- stand for the seventh wicket helped India take the lead, with Syed Kirmani scoring a brisk 42.

Erapalli Prasanna with 4/51 spun a web around the hosts to level the series at 2-2.

Defeats at the SCG and a draw in Adelaide left Gavaskar s team needing a win at the MCG to avoid another series defeat in Australia. After being put in by Greg Chappell, India made 237 on the back of an exceptional 114 from Gundappa Vishwanath, following which the home side posted 419 with Allan Border getting 124 and gutsy knocks by Chappell (76) and Doug Walters (78). This left India to get 182 runs to avoid the follow-on.

Gavaskar and Chetan Chauhan played solidly to end the third day having reduced Australia’s lead of 182 by 108, and on the fourth they added another 57 before Gavaskar’s contentious lbw dismissal to Dennis Lillee on 70 that left him fuming and threatening a dramatic walk-out.

A second innings of 323/9 set Australia a target of 143 to win the series, and up stepped Kapil Dev in one of of his best overseas performances, taking five wickets to bowl them out for 83 in 48.4 overs.

This marked India s third win on Australian soil and their first drawn series there.

By five wickets at Adelaide Oval, 2004

Adelaide 2004 will forever be Dravid s match. It was here that Dravid scripted an epic 223 in India’s first innings, putting on 303 with Laxman after Ricky Ponting’s 242 carried the hosts to 556, and hit the winnings runs with a cut through the off side before pumping his fists and kissing his India cap. Ajit Agarkar’s unexpected six-wicket haul on the fourth afternoon set up a target of 230; India started the fifth day’s play resuming their first innings at 37 for 0 but a couple of wickets left India at 79 for 2.

Post-lunch, Tendulkar and Ganguly departed to leave India 170 for 4, with victory still 60 runs away. Laxman and Dravid again combined for a fine partnership, and once the former fell nine runs short there was no doubt as to who would win. With that shot from Dravid, India clinched their first Test win in Australia for 22 years.

Following a walloping at the MCG and the infamous SCG defeat which was married by the Monkeygate controversy, India bounced back to win the third Test in Perth, traditionally a pace-filled and bouncy pitch. This Test will be remembered for Ishant Sharma’s murderous spell to Ricky Ponting on the fourth morning and Irfan Pathan’s all-round show as India halted Australia s run of 16 consecutive wins. Australia were set a target of 413 and ended up 72 runs short India’s inspired bowlers turned in a fine performance. It prompted Anil Kumble to term the success, after 124 Tests in nearly 18 years, as his “best win ever”. 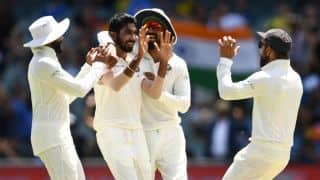 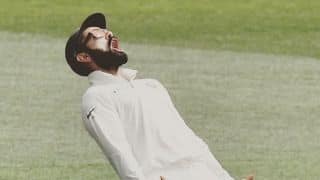 We were the better team and deserved to win: Virat Kohli