Chasing a target of 233, Rahul Dravid showed his class and remained unbeaten on 72 to finish of the game by hitting the winning runs as India won the Test by four wickets.

Rahul Dravid has not been given the epithet of The Wall for any reason. In December 2003, he lived up to the billing and smashed a match-setting 233 in the first innings to help India script a historic four-wicket victory against Australia in the second Test at Adelaide an iconic knock that was combined with technical brilliance and extreme concentration.

ALSO READ: Sehwag curbs his instincts to save the day

Steve Waugh called it right at the toss and the hosts were helped to 566 courtesy Ricky Ponting s sublime 242. In reply, India were 85/4 and needed something special to bail them out.

Dravid and Laxman conjured a mammoth 303 runs for the fifth wicket to put the game in balance. Dravid negotiated everything that was thrown at him and the duo frustrated an Australian bowling attack that lacked a little sting with the absence of Glenn McGrath, Brett Lee and Shane Warne.

The partnership was broken after Laxman, who smashed 18 boundaries, was caught behind by Adam Gilchrist off Andy Bichel. Dravid stood tall and batted with the tail to take India to within 33 runs of the Aussies.

His monumental innings, studded with 23 boundaries and one six from 446 deliveries, was the highest by an Indian against Australia in Australia.

The game was heading for a draw until Australia were thwarted by Ajit Agarkar s brilliant 6/41 as the hosts were bunded out for 196. Agarkar dented Australia s second innings with regular breakthroughs. He first had opener Justin Langer, then four overs later sent Ponting back for a duck and then returned to claim the wickets of Simon Katich, Bichel, Jason Gillespie and Stuart MacGill at the end.

Chasing a target of 233, Dravid once again showed class and remained unbeaten on 72 in the second innings to finish of the game by hitting the winning runs as India won the Test by four wickets. At the end of the Test, India captain Sourav Ganguly said: Rahul batted like God .

Dravid, as humble like always, replied: I am no god. It is satisfying to score a hundred in Australia. 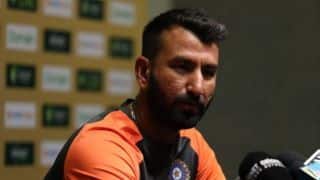