Steven Finn was England’s star performer as he grabbed his maiden five-wicket haul.

England thrashed India by nine wickets in the second One-Day International (ODI) at Brisbane and registered their first win of the tri-series. India had a poor day with both bat and ball, and ended up second-best in every department. Pramod Ananth lists the highlights of the game.

1. Rohit Sharma misses out due to injury: India suffered the first of many setbacks when Rohit Sharma was ruled out of the game due to a hamstring injury. Rohit had made 138 in the second ODI against Australia, and India would have wanted to cash in on his good form. Unfortunately, he was unavailable. India will want their star batsman to recover quickly and play in the next ODI against Australia in January 26.

2. Shikhar Dhawan dismissed in first over again: The form of Shikhar Dhawan at the top of the order is a major concern for India. Just like he did against Australia in the second ODI, Dhawan was dismissed in the very first over of the match for just one run. If Rohit is fit for the next game, Dhawan’s place might be in jeopardy.

3. Ajinkya Rahane-Ambati Rayudu partnership: Rayudu, who replaced Rohit in this game, looked as though he wanted to make the best of this rare opportunity given to him. Rahane opened the innings with Dhawan in the absence of Rohit, and he got off to a lively start. The duo stitched together a partnership of 56 and recovered to a certain extent after Dhawan was dismissed early on.

4. Stuart Binny’s graceful innings: Stuart Binny was drafted into the side in place of off-spinner Ravichandran Ashwin, and he thoroughly justified his place. He top-scored the innings with 44 and it came at a time when India needed it the most. He hit three fours and two sixes in his innings, that got India beyond the 150-run mark.

5. MS Dhoni-Stuart Binny partnership: India were struggling at 67 for five when skipper MS Dhoni was joined by Binny. India were desperately in need of a good partnership and the duo put on 70 runs for the sixth wicket. Although the partnership didn’t come at a rapid pace, it added a little bit of stability to the floundering Indian innings.

6. The familiar Indian collapse: India collapsed yet again just like they did against Australia in the second ODI. From 137 for five they collapsed to 153 all out within 40 overs. After the Dhoni-Binny partnership, the tail did not offer any resistance and lost wickets in a hurry to hand England a target of just 154 runs.

7. Steven Finn’s maiden five-wicket haul: Steven Finn was England’s star performer as he grabbed his maiden five-wicket haul. He was well supported by his teammates, especially James Anderson, who picked up four wickets. Finn finished with five for 33 in his eight overs and troubled all the batsmen with extra bounce. India’s poor shot selection too played a part in Finn’s success.

8. Ian Bell-James Taylor partnership: Ian bell made amends for his first ball duck in the previous game against Australia and made a match-winning 88 not out while England were chasing down 154 to win. He was joined by young James Taylor after Moeen Ali was sent back to the hut early. Taylor (55 not out) too played his part in the unbeaten partnership of 131 and completed his third ODI half-century in the process.

9. England win with bonus point: England not only managed to win comfortably, but also succeeded in getting a bonus point along the way. The Bell-Taylor partnership came at an incredibly quick pace and England won with 23.3 overs to spare. 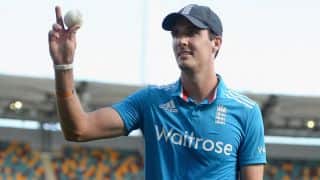 India vs England 2015, 3rd ODI at Brisbane: Steven Finn happy with his hard work paying off