Pakistan stamped their authority as the No. 1 ranked Twenty20 International side after a thumping six-wicket win over New Zealand in the second T20I to take an unassailable 2-0 lead in the three-match series at the Dubai International Cricket Stadium on Friday.

Chasing 154, openers Fakhar Zaman and Babar Azam set the momentum with a 40-run stand with Zaman plundering three fours and a six during his 15-ball 24. However, he had to depart after BlackCaps skipper Kane Williamson picked up a one-handed blinder at mid-off off Adam Milne that saw the end of Zaman.

Azam and new batsman Asif Ali then conjured 56 runs for the second wicket as Pakistan were 96/2 after 13 overs when Azam was deceived by Tim Southee s change in pace and was picked up by substitute Lockie Ferguson at mid-off. Azam added 40 runs to the run chase. Ali departed two overs later after he was out plumb leg before to Colin Munro. Ali walked back after adding 38 off 34.

Veteran allrounder Mohammad Hafeez, who scored 45 in the previous match, took Pakistan home with the Kiwi bowlers not posing any threat to the batsmen on a slow pitch. Hafeez added 34 quickfire runs with Shoaib Malik (10) as Pakistan romped home with two balls to spare. Hafeez was unbeaten on 34 off 21, while Malik added 10 to the run chase. For New Zealand, Milne claimed two wickets.

Earlier, New Zealand were lifted to 153/7, thanks to Munro and Corey Anderson, who registered identical scores of 44. Opting to bat, the Kiwis were off to a flier with Munro going berserk during his 28-ball 44. The southpaw slammed four boundaries and six during his thundering innings. The other opener Glenn Phillips added just five runs after he was caught behind off Shaheen Afridi in the sixth over.

Munro s belligerent knock ended in the seventh over after he miscued a shot off Hafeez and was caught behind.

Munro s dismissal triggered a middle order collapse as New Zealand slipped from 56/2 in the seventh over to 83/4 in the 13th over. Colin de Grandhomme (4) and Ross Taylor (3) departed cheaply.

Anderson, playing in a T20I series after more than a year, smashed four boundaries and two sixes during his unbeaten 25-ball 44. For Pakistan, Afridi was the pick of the bowlers with 3/20.

The third and final match, now an inconsequential one, will be played in Dubai on Sunday. 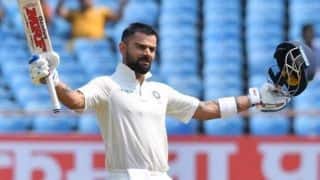