England have won their last four Edgbaston Tests and nine of the last 12.

It is against that piece of history that Tim Paine’s Australia play England at Edgbaston in the Ashes opener from Thursday, even though the wicketkeeper-batsman Matthew Wade says that the home team’s excellent record at the venue will not faze Australia.

Edgbaston is widely viewed as England’s fortress, for they have won their last for Test matches there, and nine of the last 12. When the two teams met here this month for the ICC Cricket World Cup semi-final, England team hammered the defending champions to reach their first final since 1992.

Conversely, Australian cricket teams have played 15 times at Edgbaston since the 2001 Ashes and the best result is a drawn Test match in 2009. In ODIs in Birmingham over the last 18 years, Australia have lost four times and looked on as four matches did not get a result and one was abandoned.

Head to head in 14 Ashes Tests played at Edgbaston, England are 6-3 over Australia with five draws.

James Anderson is the most successful bowler in Test matches at Birmingham, with 44 from 10 matches at an average of 22 apiece.

While the nature of the Edgbaston pitch for the first Ashes Test is not known, one member of Australia’s squad played here last month. James Pattinson bowled 26 wicketless overs in Nottinghamshire’s draw with Warwickshire in the County Championship and said that the surface he played on was rather flat and dry.

Former New Zealand offspinner Jeetan Patel has claimed 22 wickets in two first-class matches at Edgbaston for Warwickshire this season: figures of 6/16 and 4/72 versus Nottinghamshire and 4/53 and 8/36 against Surrey.

Australia named their Ashes squad on Friday, which includes seven fast-bowling options and one specialist spinner in Nathan Lyon. From the pace pool, just three will likely play at Edgbaston. They probable choices are Mitchell Starc, Pat Cummins and Josh Hazlewood, unless the Australian team management chooses Pattinson over Hazlewood. WATCH: Shahid Afridi turns back the clock with a whirlwind 81 off just 40 balls in GT20 Canada 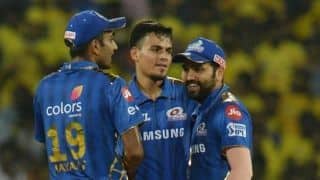