Rishabh Pant pocketed a Rs 5 crore contract after he was included in the A category.

Ace fast bowler Jasprit Bumrah has bagged a lucrative Rs 7 crore contract which puts him alongside captain Virat Kohli and deputy Rohit Sharma in the A+ category when the BCCI s Committee of Administrators (CoA) announced the Annual Player Contracts for the period from October 2018 to September 2019 late on Thursday night.

Bumrah, who has proved his credentials of being India s main strike weapon across all formats, was awarded the contract to become just the third cricketer in the list. (ALSO READ: Dhoni should continue after World Cup, Ravindra Jadeja should not be in the side: Ganguly)

Rishabh Pant was the other player who made significant gains. The 21-year-old wicketkeeper-batsman, who has a phenomenal rise in the past one year, pocketed a Rs 5-crore annual contract after he was included in the A category.

Former captain MS Dhoni has been named in the Rs 5 crore A category along with 10 other Team India players.

KL Rahul and Hardik Pandya, who received flak for their sexist comments on a popular television show, have been included in the Rs 3 crore grade B category. Umesh Yadav and spinner Yuzvendra Chahal are other two in the B category. 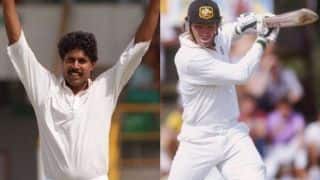