A dominant brand of cricket was necessary for New Zealand to exert in their World Cup opener.

Playing attacking cricket, the type that took them to the final of the World Cup four years ago, is what New Zealand intend to to across the United Kingdom this summer.

Having bowled them out for 136 in 29.2 overs, the Black Caps hurried to victory in 16.1 overs. Guptill drove their chase with an unbeaten 73 off 51 deliveries, hitting eight fours and two sixes in a typical Guptill innings.

In an interview with CricketCountry during the IPL, Guptill spoke of how come the World Cup, he wasn’t interested in batting like anyone else. The reference was to how his former skipper and opening partner Brendon McCullum went hard during the 2015 World Cup. In that tournament, during which the Black Caps danced their way to the final for the first time, Guptill amassed 547 runs at 68.47 and a strike-rate of 104.58. His piece de resistance was an astounding 239 not out in the quarter-final against West Indies.

Then he flew off to the IPL, where he got three games for Sunrisers Hyderabad.

In his first match for New Zealand since February, Guptill was in his elements in a stand worth 137 in 16.2 overs with Colin Munro. The business end of the World Cup was on his mind, as well as Munro’s, as they went about knocking off their target to have a handy net run-rate.

Winning the toss and putting Sri Lanka in on a lively, green-tinged track proved pivotal for New Zealand.

“I think it worked in our favour a wee bit,” said Guptill. “Even if we had been put on this morning, I think we still would’ve played with the positive intent that we had this afternoon. May not have come off, but we still would’ve gone out there and tried to play as positively as possible.”

This dominant brand of cricket was necessary for New Zealand to exert in their World Cup opener. It’s how they began the 2015 World Cup against Sri Lanka in Christchurch.

“I guess you want to build that momentum early, and today we did that,” said Guptill. “Our bowlers put the ball in the right areas and made it difficult for Sri Lanka to really get a big start on. If we bowl first in the next few games we can hopefully continue to do that and make it difficult for the guys to score. Then if we can come out and play with a bit of freedom like we did this afternoon with the bat, I think we’ll have a pretty successful tournament.”

New Zealand next play Bangladesh at The Oval on June 5. 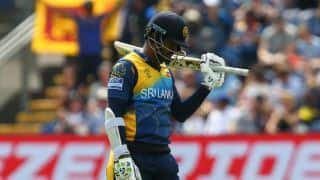