10:38 pm IST: Well, the light has gone down drastically and umpires decide to call the players off the field. There is still could be an hour’s  play possible if light permits. England 357/8, lead India by 250 runs

10:06 pm IST: Finally a breakthrough. India have a wicket to show. Jonny Bairstoe chases after a wide on from Hardik Pandya, edges it, Dinesh Karthik  dives to his right and takes an excellent catch. But the job is done for England, one would think. That sixth wicket parternship yielded 189 runs. That is 82 more than what India managed in their first innings. But Bairstow will be disappointed to have missed out on a well-deserved hundred. He goes for 93

7:43 pm IST: 50-run parternship up between Jonny Baristow and Chris Woakes. England 183/5, lead India by 76. And that’s fifty for Bairstow as well – his eighth in Test and second of the series.

7:31 pm IST: Testing times for England duo Jonny Baristow and Chris Woakes, but they managed to hang in there and take the lead to 60 over India. Bairstow is batting on 35*, Woakes is on 19*. England 169/5

6:41 pm IST: Jos Buttler departs. Mohammad Shami is giving back in kind. Buttler shuffles across too much and is trapped going for a flick. England 131/5

6: 27 pm IST: And with a boundary on the onside off Mohammad Shami, Jos Buttler helps England take lead over India. England 115/4

5: 28 pm IST: Good session for India as Mohammad Shami with another one that jags back in picks the key wicket of Joe Root as teams break for lunch. Root gone for 19. England 89 for 4

5: 10 pm IST: Shami with a snorter of a delivery. Back of length and the ball jags back in prodigously and Ollie Pope is trapped in front. Gone for 28. England 77/3

4:14 pm IST: Ollie Pope walks to the middle and gets himself a boundary, flicking one from Ishant Sharma just behind square. England 36/2

4:11 pm IST: Good stuff from Ishant Sharma, back of length delivery on middle and off, Alastair Cook has a little poke, but a slight away movement takes the edge and Dinesh Karthik takes an easy one behind the stumps. England openers gone. India back in the game. England 32/2 in 8.2 overs

4:04 pm IST: First piece of action that goes India’s way comes from Mohammed Shami. Comes round the wicket and Keaton Jennings is trapped in front. Angle was always going in to Jennings and the ball seamed after pitching. Cook and Jennings went for the review, but Aleem Dar’s decision remains. England 28/1 in 7.3 overs

3:55 pm IST: Six overs done and England are 24 for no loss. Alastair Cook and Keaton Jennings have not been troubled much by the Indian pacers yet.

3:30 pm IST: And we are underway. Alastair Cook and Keaton Jennings open for England on a bright ans sunny day. Good day for batting

2:30 pm IST: Hello and welcome to our live coverage of the day three of the 2nd Test between India and England at Lord’s.

On Day 3, all eyes will be on the Indian bowling line up to dish out a similar treatment to England. Vice captain Ajinkya Rahane said that the inclusion of Kuldeep Yadav over Umesh Yadav in the side is a tactical move and that they are expecting the wristspinner to make some serious impact.

James Anderson picked up his 25th five-wicket haul in Tests as India were bowled out for 107 in the first innings. For a brief while, the skies in London cleared before rain once again affected play on a day where only a total of 35.2 overs could be bowled.

In those overs, it was Anderson’s 5/20 and Chris Woakes’ extraordinary spell that ran roughshod over the Indian batting. India were 11/2 before the first spell of rain arrived, and later reduced to 15/3 before a second spell that resulted in the loss of four hours worth of play.

News: We would have bowled out any team in world in these conditions: Anderson

News: We were hampered by constant stoppage in play: Rahane

News: Why does the axe have to fall on Dhawan? Asks Laxman

Gallery:India collapses for a paltry 107 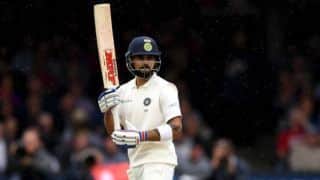