England lost six wickets for 48 runs and were left reeling at 198/7 at stumps on Day 1 of the fifth Test.

Ever since Alastair Cook walked out to bat in his final match for England, he seemed focussed. The drives were finding the middle of his bat than its edges, and the flicks finding the boundary ropes. By the end of the second session, England were 123/1, the former England captain 34 shy of becoming just the fifth batsman in history to achieve the rare distinction of scoring a century in his first and final Test. Such was his determination that Cook looked well on course to getting there.

But as the Oval waited in anticipation for Cook to score those valuable runs, Jasprit Bumrah, who had bowled his heart out until then, silenced the 25000 faithful by denying Cook his fairy-tale finish: a fair delivery that the left-hander played on for 71. His dismissal triggered a huge collapse for England, who went on to lose six wickets for 48 runs and were left reeling at 198/7 at stumps on Day 1 of the fifth Test.

Let down by poor catching – India dropped Cook and Moeen Ali in a span of four delivers early into the second session the Indian pacers hit back just when England seemed to be running away with the advantage. Once Cook departed, Bumrah produced an inswinger that had Joe Root play across the line and miss. Rapped on the pads and given, the review not saving him. An over later, Ishant Sharma dealt Jonny Bairstow his second duck of the series. The Indian pace attack that looked flattened, had come alive.

Moeen Ali, who batted dourly for a 170-ball 50, attempted at putting the England innings back on track with a 38-run stand between them before the effort was snapped by Ravindra Jadeja. Ben Stokes went back and almost yorked himself for the wicket.

England s hopes were pinned on Ali and Jos Buttler, their leading run-getter of the series. But Ishant had other plans. In two overs, he removed Ali and Sam Curran, both ending to wicketkeeper Rishabh Pant to leave England reeling. India had the option of taking the second new ball but opted against it, a decision Ishant ensured they didn t regret. The fast bowler produced splendid figures of 3/28.

Buttler, England s last recognised batsman escaped with a couple of close reprieves. He was given not out off a caught behind appeal, the replay suggesting there was daylight between bat and ball. Two overs later, Shami had him out LBW. Buttler however, opted for a review, looking rather doubtful, and had the decision reversed in his favour because of an inside edge detected on the snickometer.

In a stark contrast, Cook and Ali had played out a wicketless second session for England. They were laborious in scoring runs post lunch. It took five overs before Ali struck a boundary off Bumrah for the first scoring shot of the second session. Besides the dropped chances, India lost their first review when Ali shouldered arms, but the ball seemed to be heading over. Jadeja dropped a couple of half-trackers and Cook was quick to play the cut shot, while Ali drove with precision.

A focussed Cook walked out to a guard of honour by the Indian team after his Root, for the fifth straight time, nailed the coin toss. The former England captain, unfazed by the slowness and dryness of the surface, started off in a manner that he has for the last 12 years, watchfully. With each passing over though, England realised how wonderful the conditions were for batting. Cook got into action with a typical flick off the pads for four, and as Bumrah operated round the wicket, the left-hander struck a fierce cut shot followed by a full-throttle pull. A drive down the ground brought up Cook s 57th half-century and the entire Oval to its feet.

The beginning wasn t as easy. While a few balls nearly took Cook s outside edge, Keaton Jennings was pinned on the helmet early by Ishant. He was squared up frequently by Bumrah on several occasions but seemed fiercely dedicated to not give away his wicket. The challenging time Jennings endured can be gauged by the fact that he needed 43 deliveries for his first boundary.

Bumrah and Ishant combined to bowl 13 overs up front. But with no assistance from the pitch, Virat Kohli threw the ball to Jadeja, playing his first Test of the series. A cautious Jennings reverse swept the left-armer to shake off the cobwebs. But with the ball beginning to grip, he offered a faint tickle to KL Rahul at leg slip for Jadeja s first wicket. It was Rahul s 12th of the series. 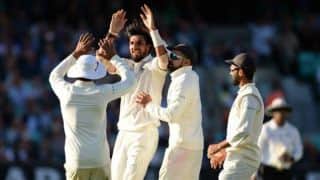